Many people struggle when painting white. A lot of beginners start out trying to paint white directly onto the black undercoat they've primed their model with. Unfortunately, this usually ends up with an uneven coat of paint with a splotchy appearance that really makes the overall quality of your mini suffer.

A simple fix to this age old problem is to do it in steps! Here I've gone with a grey base color to build upon, in this case Codex Grey. For the second step I've used Fortress Grey to help lighten the area even more. For the final build up, I use Skull White. Skull White is a fickle color and even with this build up, usually needs two slightly watered down coats to cover completely.

There are tons of different directions that get you to much the same place. It's all about the hue of white you want. So get out there, experiment with it, and learn a method that you like! Or just swipe this method and have at it!

After a few years of modeling, everyone learns a few hobby tips that make life easier. Each Friday I'm going share a little bit of wisdom I've come across.

If you don't have the patience or skill to brush on fine lines in the recesses of armor on your infantry, get yourself a Pigma Micron pen. These pens are available in many colors and a few sizes (although you'll probably want the smallest: 005 = 0.2mm) and you can find them at most chain hobby and craft stores.

If you are lining a tank and are having trouble getting nice clean lines between the armor plates, try using gouache. Also readily available at most craft and art stores, gouache is just pigment suspended in water. So if you go outside the lines, you can easily fix it with a wet Q-tip. Seal the gouache with an oil-based clear coat and it should last forever.

Get out there and master your lines, soldier!

Besides rock-steady hands, what tips do you have for creating fine, straight lines on tanks and infantry?
Posted by Real G at 14:17 5 comments:

In preparation for the Macharian Crusade I've done up a Big Mek as Masta Blasta, an Ork known for cramming Bomb Squigs into his Shokk Attack Gun.

The main things I focused on were matching the face of the Mek to the one in the campaign book, and adding a large bulge to the Shokk Attack Gun feed tube to represent a Bomb Squig. The head was easy: green stuff goggles and a light bulb. For the tube bulge, I cut out a round of plasticard to represent an Ork tank bomb and squished it into a blob of Milliput vaguely shaped like a squig (a large bump for the body and two legs). Once that was applied, I used some green stuff to restore the patch-work texture to match the rest of the tube.

For the paint work, I got my inspiration from this technique from Da Waaagh. Instead of doing the green+green+green base/highlight/wash I normally do, I wanted to paint the base coat of very light and bleached out colors and then use the new washes and my old inks to tint and shade the skin, clothing and gun until I was happy with the depth.

Here are the work in progress shots: 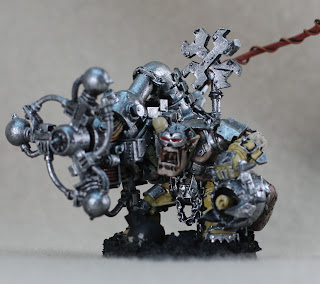 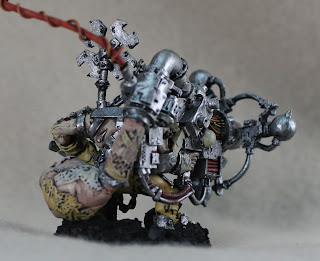 As you can see the base coat is really white and not very orky at all. But have faith-- washes to the rescue! Also, the model is not assembled in the above pictures, so things are a little skewed. 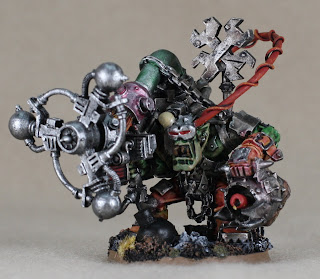 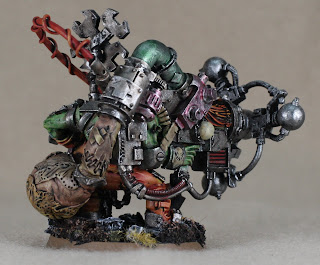 Here is after the first run of washes and you can see that the color is starting to come out. Two coats of wash were used on the skin and pants. The color is still a little faded for my taste, but you can see some of the nice red-orange-yellow on the pants and brown undertones in the skin.

Overall I really like the difference in skin and style that it will bring. I will probably use this for some of my other HQs and special characters, although I might try to stay closer to the technique posted on Da Waaagh for the next model since I still have a lot of shading to go with Masta Blasta here.
Posted by Real G at 13:48 No comments:

It's that time again! I know it's a bit sooner than usual, but we moved it up to coincide with the Halloween season! Be sure to check out all of the details and get in on the fun!
Posted by Unknown at 00:31 No comments: