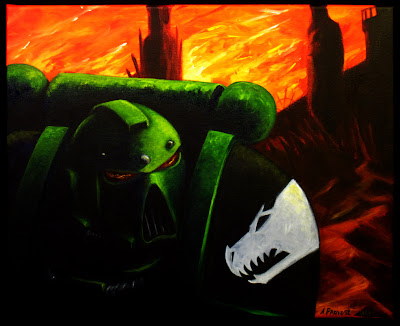 Some of you might remember the last space marine painting that I posted a while back.  This painting was started soon after finishing that first piece and was to be in the same vein.  The background went in quickly enough, but with life getting in the way, I couldn't find the time to settle in and work in the marine.

With a long break through winter, I was able to get back to the easel and broke out the paints again and in a single sitting, I finished the painting off, all while preparing a dinner!

I'm really quite happy with this piece and feel it as a natural evolution from the first marine.  Future iterations would see much this same sort of evolution and a push toward more dynamic compositions.

If you're interested in seeing more of my work outside of the hobby, feel free to browse my art website/blog here.  Thanks for looking and I hope you enjoy my work!
Posted by Unknown at 09:00 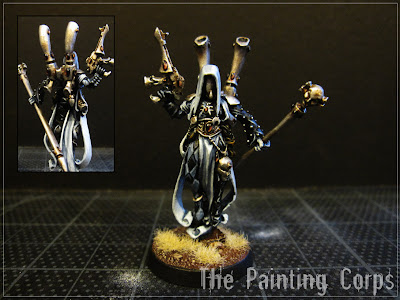 In an effort to get my painting hands back before I dive into a slightly more involved commission project, I thought I might start out with some simple tactical marines.  The other reason for this squad is that I wasn't aware that my friend and I were going to be swapping gifts and when he told me my gift was being worked on, I had an instant flash of what I should do for a return gift!

The color scheme is that of his Falcon Guard Chapter.  This faction is one of the many he has started developing for his Battle for the Malina System blog and campaign setting.  I've been helping with color choices and even did a single marine for him some time back.  I have a ton of tacticals waiting for paint and these guys make a great start for his force, which as of this squad totals 6!

The modeling went quickly as all of these are starter set marines from either AoBR or the old BFM sets.  Each was based with a simple sand/ballast mix.  For more on basing check out our basic basing tutorial.

For the green shoulder trim, it's simply a painted metallic and then washed with Thraka Green.

Hopefully they keep him excited to hobby and kick start him army well when he gets to them!  Now, on to the next piece...