To all the Veterans 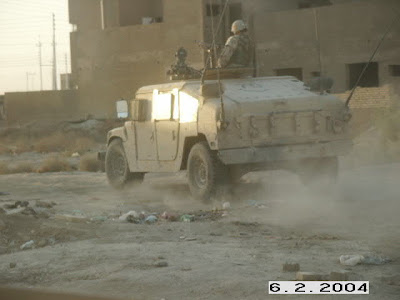 To all that have served your country, past and present, thank you my brothers and sisters.

It's 120 degrees.  It's hard to concentrate in that sort of heat.  You don't even want your DCU's to touch your skin kind of hot.  The metal roof just redirects it all into your face and nothing is safe to touch, not even the plastic of the trigger is comfortable.  There's always someone watching, even in the middle of the day when the bad guy is holed up in his house keeping out of the heat.  He's still watching you in all of your miserableness.  Sweating.  You don't even stink in that sort of swelter, it's just water draining from you as fast as you can pump it into your body.  Your welcoming the idea of an IV stick at any moment just so you don't throw up from filling your gut with what ice from your frozen water bottle has melted so far.  Turtle your neck keep your face pointed down a little and keep your arms and hands covered, it's all you can do while on patrol.  Then, you're on the move again.  Hot exhaust meets hot stale air from the local sewage hole in the street, if you're lucky, this time it won't splash in your face and mouth.  Your driver veers around hard and slings your ribs into the turret ring.  You don't stand up on the route.  You do and it's your ass.  An overpass is coming up.  God damnit.  Your up, your down, your up.  Clearing those never gets easier.  You need to wait a little longer on the back end before coming up.  The insurgents got smarter, again.  Last week some kid got his face blown off on the backside clearing an overpass, so an extra second down behind your armor plates should get you clear of anything the baddies put up there.  Coming up on 3, thank god.  One last loop and it's back in the AC to pray there isn't a situation that needs QRF later today.  It's a fruitless prayer though, and you know it.  One oil can on the side of the road and it'll be you, back on the route again, with your other squad stuck baby sitting EOD for 2 hours.  They will never use those god damned 50 cal rifles to recon by fire.  Would speed things up so much if they would only learn that.  You're up, you're down, you're up.  Overpasses get old being the middle truck.  At least this time the lead truck didn't get stuck on the off-ramp like yesterday.  It's 3.  Of course the gas station on the route is completely overwhelmed today, keeping you on the route for longer as you get the ING to do their job and clear the road.  They will never really understand will they?  Changed over on the radio.  God that AC will feel good.  There isn't much of a change in mentality out the gate or in, just differing levels of armor.  It's gotten so easy to strip that vest off after weapons are cleared.  Undo the velcro, left arm then right and it's laying on the truck roof next to you.  Dump it into the seat on the way to the motor pool, find your hat, hop down and turn the radios off.  Only a few rounds expended today, only a headlight the casualty.  A good day.  Here's to hoping there is some unfrozen water around.﻿