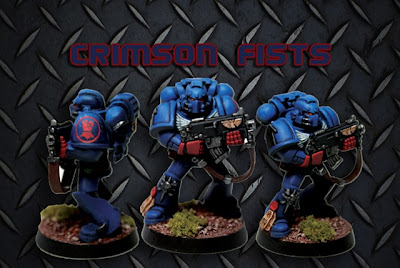 Les has put out another great Space Marine video, this time painting Crimson Fists!  I've always loved the deep blue of the chapter, and here Les is doing them some serious justice.  HD, Full Screen!


Watch, learn, try something new! Good to see some more painting videos coming from our buddy Les! Hope the video finds you all well today, and in time for that new project we were just talking about earlier this week!
Posted by Unknown at 08:00

You might have noticed things have slowed back down here on TPC.  Unfortunately, the site has fallen victim to the rigors of packing and prepping for a move across town for myself.  This means my things are all in boxes and cases waiting for the commute to a new home.

With this break comes my hopes for a new influx of content for TPC once I'm settled back in and ready to rock again with wargaming.  The big project in mind being a new terrain set and table.  Smaller projects being the finishing of my Warriors of Chaos cavalry army and possibly the completion of my AoBR orks and other assorted models.  The most intriguing of these projects being the table and WoC force for me.  There is always the chance of the random one off model finding its way to my table of course!

So with an eye to the future, I'd love to hear what others are planning to work on in the near future.  What sort of grand projects do you have in mind?  Anyone building a new army?  Any exciting campaigns?  Got a big tournament your building up for?

Let your ideas flow, and throw some feedback to other ideas.  Discussing and evolving ideas makes for a fertile creative playground!
Posted by Unknown at 14:48

You might have heard of a little term 'Non-Metallic Metals' or maybe if you've been in the right circles as of late 'True Metallics'.  Every few years a new term is coined for a new style of painting metals it seems.  For me, it's a wonderful progression of techniques that mixes and melds elements together to create a new idea for modeler/painters to mull over for the aesthetic of their models.

So which is best?  Most people tend to favor what they can get better results with from their own brush.  Others tend to love that which they can't emulate on their own.  This personal bias can come into play heavily when you're viewing models for a painting contest, especially when you're judging one!

I present this question to the community:  What do you find more pleasing to your aesthetic sensibilities?  Have any amazing examples to link to?  Why do you enjoy one over the other?  Or if you like them both, what do you enjoy seeing each technique being used on?

Leave your comments, have a discussion, and don't be afraid to reply to each others thoughts.  Opinions are best when fully realized through thorough thought provoking discussion after all!
Posted by Unknown at 11:15 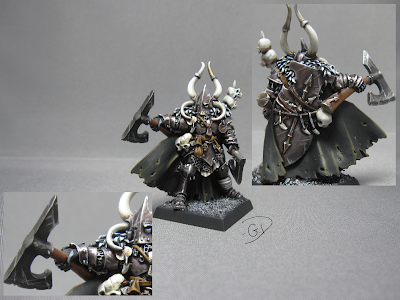 Around the middle of last year, I decided I wanted to break into Fantasy.  One faction in particular fed my need for amazing models clad in armor with an air of bad ass.  Warriors of Chaos would become the army I would lead onto the battlefields of the Old World.  We will plunder and destroy, well once I have them painted that is.

I bought this guy from ebay late last year.  I knew I wanted to pick him up once I started the army.  It's such a strong sculpt I knew I had to have him, even if he didn't fit the original theme idea of an all cavalry warband.  When he arrived I got started.

Having at him with metallic paints to start off I painted most of the model in GW Chainmail.  The armor was then washed with successive layers of Devlin Mud, the weapons and chainmail link armor with layers of Badab Black.  With the weapons I played with the idea of true metallics, as they're called, going to the extreme black where appropriate and using a gradient to give variation to the surfaces.  I then used a few small brush strokes of GW Chainmail to scratch the surfaces of the armor and weaponry.

The browns and bones were done using Bestial Brown, Snakebite Leather, and Bleached Bone in various combinations.  The skulls caught a final highlight of skull white.  This is my standard method for tabletop.

The fur was started with a black base color, highlighted with fortress grey and given a final highlight of skull white.  The end result is a very vibrant white that gives a stark contrast.

The chaos star was done by painting layers of Gryphonne Sepia over chainmail.  Scratching done the same as above.

His cape was painted black and given a few line highlights of Bestial Brown, highlighted lightly with Snakebite Leather.  I really like this look and have used it before on other Warriors of Chaos models as a way to do black leathers.

The base was drybrushed with Codex Grey and then Fortress Grey to highlight.

All in all, it's a very subtle paint scheme that really lets the models strong sculpt work shine through and not detract from what's been established with the pose and imposing look of the piece.  Overall I'm very happy with it and can't wait to see him taking skulls and slaughtering the weak.

I'm working on hammering out a 500 point force for a few upcoming gaming events, so expect to see more chaotic happenings around TPC in the future!
Posted by Unknown at 12:39 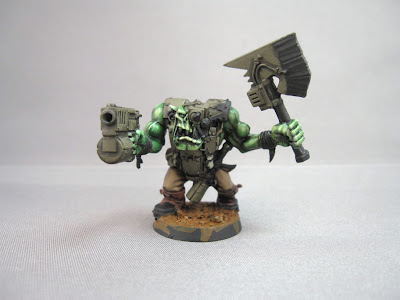 I have really taken to filming my painting sessions.  It's given me a nice new outlet to share tips and tricks with.  It's also a great way to learn how to edit video!  Today I bring a tip from my latest footage, painting Ork skin.

To preface, I never approach a models skin the same way twice.  I've made mention of my love of variety with skin tones before, and have made more headway in that effort with my Orks.  With each boy, nob and warboss, I've played around with the colors on a whim, never really bothering to remember or write down just how I got to a finished skin tone.  But with that in mind, I thought it would be a good way to show the process by filming as I painted my latest Ork model.

They're set at double speed, with queues for colors used, so it shouldn't be too hard to follow!  With that in mind, give the videos a watch!

You might notice that at one point I go to using a watered down Bleached Bone, though I found it to be a little too strong for where I was at with the model.  I ended up using a 50/50 mix of Bleached Bone/Goblin Green instead and did a final highlight of pure bleached bone.  It worked out better, and faster, than it would have had I not used the mix.

The matt varnish is used to knock out some of the shine.  I still think he could go for another hit of it, but will wait until the model is finished and do a complete spray of the model with the airbrush instead of painting it on.  Using washes will leave you with a lot of shine, so be prepared to kill it off. 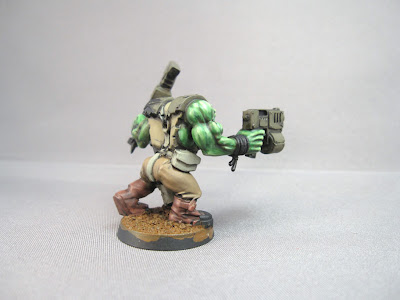 I really dig some of the music I'm finding on youtube!  I hope you enjoyed the videos and here's to it helping a few of you out there!  I'd love some feedback as well, let me know what you think!
Posted by Unknown at 08:00

On the Table: Everything 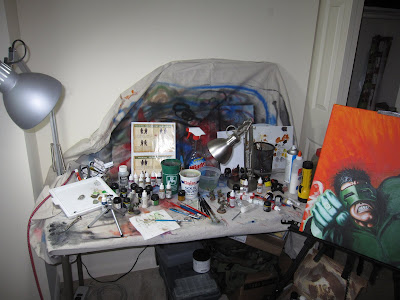 I've never claimed to be very organized when it comes to modeling or painting projects.  My table gets a little out of hand in only a few days of constant work.  I took this for Massive Voodoo's latest contest and thought I would share considering just how ridiculous it's getting.

Can you pick out all of the projects in the works?  It's very 'Where's Waldo'!
Posted by Unknown at 13:18

Email ThisBlogThis!Share to TwitterShare to FacebookShare to Pinterest
Labels: On The Table

Took some video while I tested out some different fur colors the other day on my beastman. Gave it a quick edit to try my hand at some video editing. I'm still getting my legs with the program, but I suspect I'll have the hang of things soon enough and the videos will look all the better for it!

It's double speed with queues so it should be easy enough to follow. I went without sound for now, still working out how to edit music and voice in. So throw on some music and give it a watch!

There was a focus issue early on in the video, but I kept it because it shows the use of the palette well. Plus it's just washing!

Be sure to watch it at 480p! Let me know what works for you and what doesn't. I want to make these better with each video!
Posted by The Painting Corps at 08:00

Email ThisBlogThis!Share to TwitterShare to FacebookShare to Pinterest
Labels: How To, Painting, Video 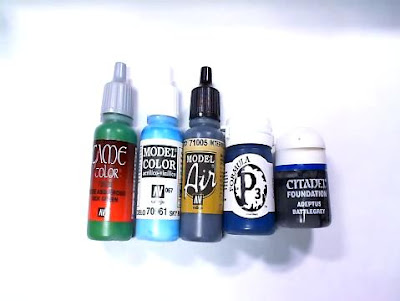 Yesterday found me too busy/occupied to get anything worked up for a quick tip, so today we check out a video by LBursley about different paint types.  If you've only ever used Citadel paints, this might be a great video for you to check out and learn about the alternatives available to you!


Use what works best for you, but keep in mind the techniques you are using and the projects most appropriate for each!

I'm finding ways to make video a more prominent part of TPC, but it's going to take time to get it right!
Posted by Unknown at 08:00