I recently started working on some Orks after acquiring the Assault on Black Reach boxed set. It took me a bunch of months but I finally finished cleaning them all off and eventually finished a model for my test scheme. One of the things that really seemed to catch peoples eye was the simple yet effective rust effect I came up with for my metals.

To start off with you of course need to get a base coat started. This could be whatever color really, here I've gone with a Brown Violet from Vallejo. The second step is to take a very beat up old brush and apply splotches of Vermin Brown by stippling the old brush in a random pattern. You can apply as little or as much of this as you want, it's all about the final effect you're going for! The third and final step (at least for today), is to stipple Fiery Orange over the Vermin Brown layer. I used a standard brush for the final step and made it broken and random. For an idea of where you can take this here's my finished Ork test model: 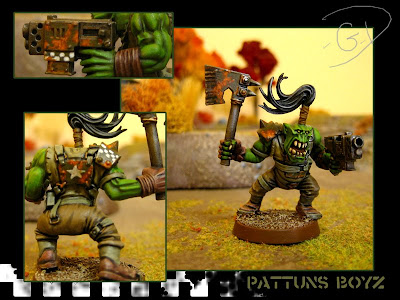 As you can see, I have done some additional weathering and metal work around and on top of this effect to make it more subtle and feel more realistic.

A quick side note: Apparently GW isn't selling Fiery Orange anymore, but you could easily use Blazing Orange instead for this technique. For those of you with Fiery Orange still, disregard!

There are many different rust painting techniques out there, and you should definitely do some research as to just what style of rust you are going for on a particular piece. The more you know about the different approaches, the more variation and realism you can apply to your own take on rust.

So lets here em, how do you paint your rusty bits?
Posted by Unknown at 10:59