With my most recent project, my Badab War Campaign army, The Sons of Medusa, I've really been pushing a few techniques I've just recently stumbled upon in terms of weathering armored figured and vehicles. The first of these techniques being the sponge painted battle damage that I've gone over in the past. The newest addition to my repertoire is a little technique I don't think I'll be doing any weathering without from here on out. Pencil Weathering.

It's as simple as it sounds, you use a pencil to weather edges and scratches onto your figures. There are some things you should take into consideration though as you move forward to try this little trick out. 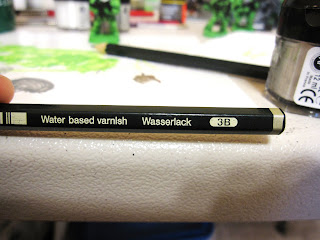 The lead: Too hard and you'll start scratching paint off. Too soft and it breaks up on your surface as you're applying it, dusting your figure with graphite! I've found a good in between to be a 3B art pencil

. This gives me just enough density to put the graphite where I want it, while giving me the softness I need to draw the scratches without pressing too hard. 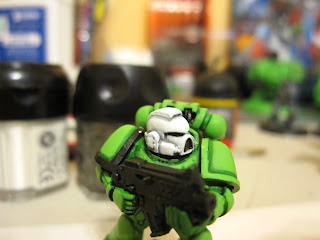 Selective and controlled application: It's easy to find yourself going a bit overboard. Pick out a few spots early on that would most likely catch the brunt of the wear and tear and add a few battle scratches sparingly. At the scale most of us are using this, the impression is what truly matters, not the 100% 'accurate' battle damage. 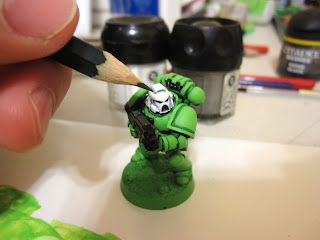 Point or Edge? When you want to do scratches along an armor plate, it's an obvious choice, use the point lightly to apply the scratch. For more overt battle damaging, use the point a bit heavier. For wear and tear, I've quickly found the side of the lead along an edge or point to be much more effective. 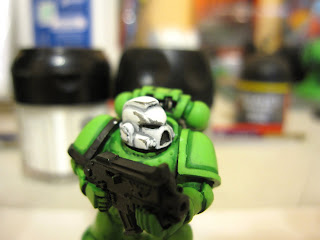 Varnishing: At first I was a bit worried how my matt varnish would react with the graphite. But if you DON'T varnish, you'll never be able to touch the model again! The graphite will smudge very easily since it's a softer lead, but even with harder leads you're going to smudge your work if you don't varnish. So varnish your model in a few light coats and you shouldn't have any issues. This will darken the graphite a bit, but it only makes it look better if you ask me!

This simple, unassuming technique gives you quick, good looking results that you can use on an army scale with good effect. The light sheen of the graphite still shows nicely in the light, even after varnishing, if a bit darker. Armor plating, vehicles, walkers, weapons, you name something that could be made out of metal and painted, this technique can easily work on it.

I've heard of other pencil applications using colored pencils and will be exploring those in the future as I move even further into the depths of model weathering. Hope to have you all along for the ride!

Any other out of the ordinary weathering tips out there? I'd love to hear about them! And possibly even feature articles about them in the future!
Posted by Unknown at 12:53

Email ThisBlogThis!Share to TwitterShare to FacebookShare to Pinterest
Labels: Armor, How To, Quick Tip, Weathering