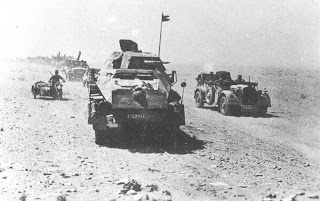 For some time now, I've been mulling an idea over and over as I waited out the release of more of the new GW Imperial Guard tank kits.  The newer details and plastic had me intrigued with the latest Leman Russ model, and I've always had a thing for the Guard.  With an endless number of variations on the theme, I've decided I would take my inspiration from the forces of the African front during WW2.  Hard fighting western style with a touch of 'local' custom.

I don't want to go with typical GW tread sets, but I've had little success finding suitable suspension and tracks/wheels to create the image in my head.  So today's Ask the Corps comes from me directly.

How would you go about creating the WW2 tracked vehicle look using GW kits?  Have you seen a project of late that has altered the vehicles in such a way?  Have photos?  Kits that would work?  I'm all ears folks.

Got a question of your own you'd like to see featured here?  Send it along to ThePaintingCorps@gmail.com with the subject 'Ask the Corps'!
Posted by Unknown at 16:00