On The Table: Warhammer Fantasy 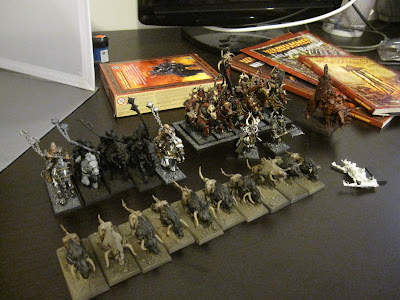 Over the weekend I finally got my first taste of Warhammer Fantasy Battle.  I've been collecting an army for some time now, and slowly but surely painting them up.  With more Fantasy games in my future, I'm really trying to settle in on getting an army 100% painted.  Since I've got so much done already with my Warriors of Chaos, I'm likely going to try and finish them up first.

In the above you can see what I'm working with so far.  A lot of champion types and just a few core units.  When I originally started the army, it was all because of the champions, and just how amazing the models were.  So naturally, I've gone after those models and used them to get me excited about the force.  So far, it's worked!  After the weekend, I've only added to my collection of champions and heroes by picking up the lord model you see still in the box at the back of the army!  I still need another core choice or two to help flesh out the army a little.  I'll likely go with a nice block of Chaos Warriors after seeing how solid a choice they are this weekend.  I also have another set of Chaos Knights in bits and pieces waiting for me, but until I have enough points in core, it's going to be hard to take them!  But given how hard they are in game, I'll definitely be doing so. 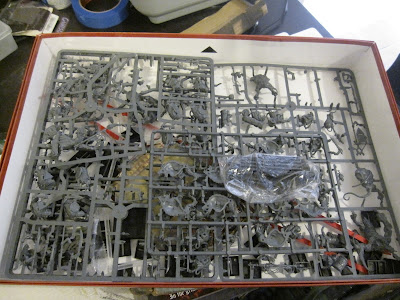 This weekend also saw me winning an Island of Blood boxed set that was graciously given up as a prize for the friendly event by Empchild of Akers Minis.  I was tops for points on the weekend after my pairings went  4-0 on the day (it was a doubles set up with one player taking 1000 points and the other 500 points, with WHFB and 40k being played).  I snagged the box, which was just one of multiple prizes, as I'd been looking to get it sometime in the near future anyways!  I split the contents with a good friend of mine and took the Skaven for my own letting him have the High Elves.  I've always loved the Skaven, but have never really wanted to paint that many mini's for ANY army, but given how amazing these new plastics look, it's going to be hard to not paint them up...At the very least I have a lot of great models for my Mordheim Warband! 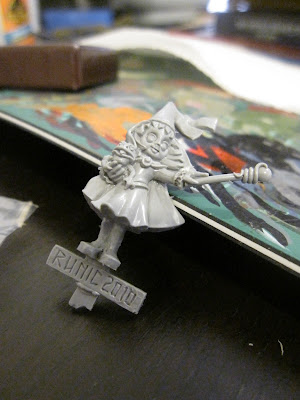 A special treat on the weekend was a box of these great little minis from our good friend Jakob Rune Nielson.  Jakob had been sculpting this piece for a month or two leading up to the weekend and had them cast just about two weeks prior, and sent them just in time to be used as prizes as well!  My friend Pesmerga was kind enough to hook me up with the one he picked up as a prize since he had already purchased two directly from Jakob earlier!  Jakob's minis are always so full of character and have a great storybook fantasy feel to them.  I can't wait to paint this one up and might have a go at creating a different (see: creepy) look for the model.

I've got a lot of things on my painting table right now, and not a ton of time to get them done!  But any progress is good progress right now, so hopefully the Warriors of Chaos find a few hours here and there in the coming weeks.

Anyone else getting into a new game?  Starting a new army?  Just digging a newly released model?  What do you have on your table this month?
Posted by Unknown at 11:10