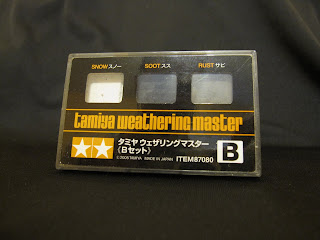 Whenever my game store is closed for the day (stupid Wednesday!), I'll usually take that time to go scouting around other hobby stores. You've probably noticed wherever I go, I'm always on the lookout for different things from terrain to modeling supplies to tools. And on a trip down to the local Hobby Center, a model train, military, and RC shop, I found a great supply of various Tamiya products.
My first Tamiya purchase came in the form of this little number, a compact that claimed to give wonderful and realistic results with little effort! I'd seen something about these online, but hadn't seen very much to be honest, and even to this day, much of what I have found has been from Tamiya themselves! I just HAD to give this little compact a try. 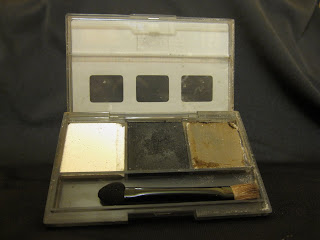 Don't be alarmed by the photo here, this is after a few months being knocked around in my hobby room and model cases. When I first opened the compact, it was nice and neat and the colors were true. I was reminded immediately of the old halloween make up shops used to peddle to all of us when we were young. More recently though, it reminded me of some of the military camo paint I was using here and there for missions in Iraq!
Once I opened it, I set to finding out just how this stuff works. At first, I started to mess with the brush on the applicator, but quickly found the compound to be far too hard to start off using it. The brush is much like a make up brush in it's stiffness, and the sponge end isn't much stiffer, still much like a make up sponge! The compound itself is more used as a smearing than a powdered pigment (such as Mig Pigments). It takes some getting used to but once you get the hang of it, the effects are easy, quick, and look great! 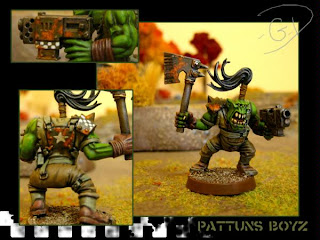 My first uses were to blacken the ends of my Ork slugga's with the soot. It might be a bit hard to make out in this photo, but once applied, it gave a wonderfully subtle effect that took no time at all to accomplish! 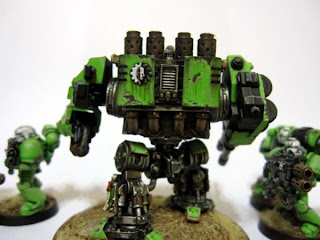 My next big application of the weathering compact was to use it on my Sons of Medusa Venerable Dreadnought, Perseus. With this piece, I used it selectively but to great effect in conjunction with the GW Washes (in this case Gryphonne Sepia) which gave just enough tooth for the compound to really attach itself to and give a great look. In this photo you can make out where I used it around the vents and on the smoke stacks. Just a few quick swipes with the sponge achieved this look.

You'll need to seal this stuff in after application, it doesn't ever really set, so using a varnish of some type will keep it where you want it and off of where you don't.

Something else to keep in mind if you're planning to pick up a weathering compact though, is how you'll store it. I have quickly found that just throwing it in your modeling bag isn't a viable option. It's dried out on me and cracked up a lot now. It's no less effective on the models, just a pain to clean up and work with (see: Messy!) than it was when it was brand new!

I've slowly started purchasing more Tamiya weathering products and paints since picking this up. Has anyone else used any of their products? We would love to hear what folks have found works and doesn't!
Posted by Unknown at 11:00