How To: Painting Dark Eldar Mandrakes 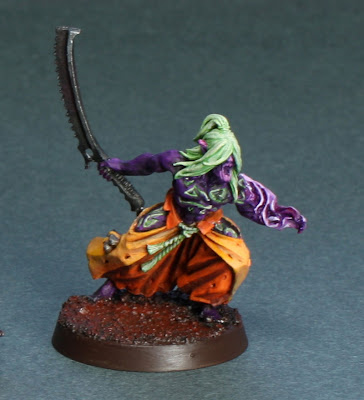 In Part 1 I went through preparation of Dark Eldar Mandrakes and here's the companion to that article that covers a little of my painting thought process and actually getting them painted.

First, a little bit about Mandrakes from the Dark Eldar Codex: Mandrakes "flesh is coal-dark and seems to absorb rather than reflect light" and they "go to war clad in the patchwork skins of those that have betrayed them."  In the design notes, Mandrakes are referred to as a negative of a normal Dark Eldar, and with the dark skin, light clothes and hair Mandrakes certainly fit the bill.  I already knew that I wanted to do their "meat skirts" in an orange-yellow.  I want to try some different orange-yellow techniques for my Fire Hawks army.  Leathers come in all sorts of colors and the orange-yellow is realistic enough for me.  I figure Mandrakes have nothing to do all day except tan the skins of their foes.  Here's some natural tanned leather as a reference.

So then where to next?  I knew I wanted a dark skin color and another color to contrast for the hair and runes.  With an orange as my base, I made a quick trip over to Color Scheme Designer to pick out a nice triad.  Looks a little like the Joker from the 1960's Batman, but we'll tone it down a little so it isn't so bright.  Here are the colors used for this project:

As you can see, I didn't make shade the purple or green.  The green I'm only going to make lighter, and the purple I'm going to make much darker by other means.  I also used the same colors for the two different oranges, just started them from a different spot in the dark-light scale.

Rotting Flesh isn't far off from Bleached Bone, but I wanted to keep the green tint, so I did mix them a little.  If you wanted more traditional hair you could go up to Bleached Bone and hit the highlights with white.

Here are the step-by-step pics: 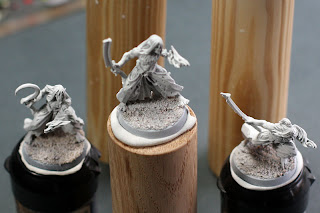 When we last left our heroes... as they were last episode. 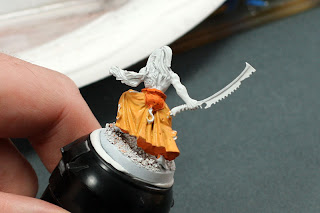 I've noticed that no one else paints the divided skirt.  Why is that?  Looking at the model closely there are two very distinct pieces of fabric.  Some models have the patch-work lines, some don't.  I suppose you could also give each patch a slightly different fleshy color, but that's not the look I was going for here. 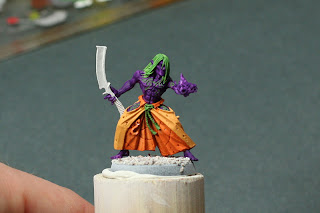 Now we're starting to get somewhere.  The Liche Purple is really dark, which is perfect.  I've also used very thin Goblin Green to fill in the runes on the chest.  I didn't really paint them, as I let the paint pool in there.  I will highlight them later, so I want a nice fuzzy green edge to get a little glow effect. 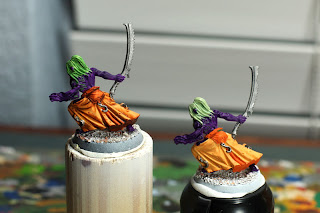 Now I'm at a cross-roads.  I completed one model's skirt through the shadings to see how it would turn out.  You can definitely see the contrast compared to just the base-coated model.  Appropriate parts have also been given a coat of Boltgun.

The model on the right was a tester for a few ideas.  I wanted to see what Rotting Flesh looked like on the hair as a base coat.  It wasn't quite green enough for me, since I knew it would be almost white once I added Bleached Bone and white highlights; I wanted to keep my green.

I also wanted to see how I could darken up the skin so I threw on a wash of Leviathan Purple.  This did not work for a few reasons.  First it didn't really darken the purple at all.  Second, the wash leaves a somewhat glossy sheen.  I was going for coal-dark and I wanted to make the skin as matte as possible.  Clearly I needed a different method of darkening the purple.  More on that later. 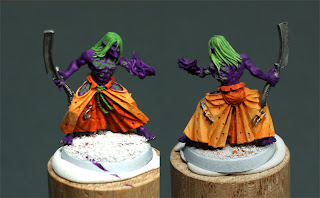 First shading on the skirt, and the base on the hair, runes, belt (it is, of course, made from his own hair) and base coat on the metallics. 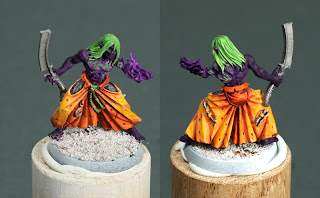 More shading on the skirt and now we get the darker skin tone.  This was achieved with very thin coats of Chaos Black.  More and darker towards the sword hand, lighter towards the bale fire hand. 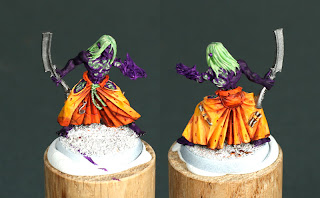 Highlight on the hair and belt and using that same Rotting Flesh color to pick out highlights on the body runes. 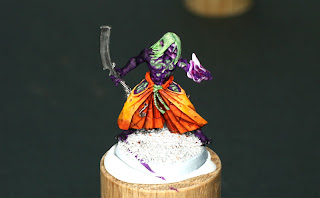 Now a mix of Liche Purple and Tentacle Pink and then straight Tentacle Pink for the bale fire hand and then only a little on the head and ears.  Highlighting the nose, chin, top of the brow, cheek bones and ear tips gives him a little more of a face. 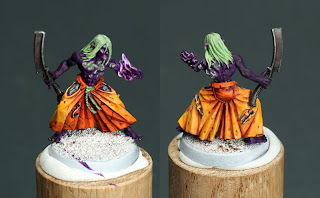 And then the work on the metallics, using TMP (more details here).  I used Sanguine Base a little here on the blade to give it a little rusty flavor and so that it wasn't so much contrast between the metallic and the rest of the model.

The basing was just Umbral Umber with a little bit of lighter brown stappled on and then a little rust weathering powder to knock down the shine and add a hint of red. 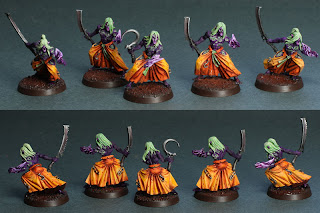