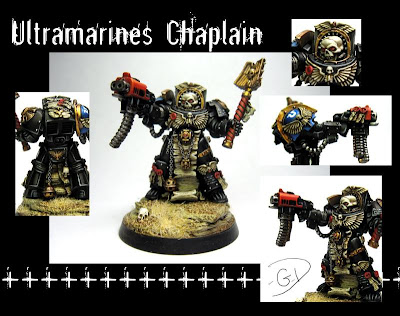 With my time at a premium, I thought I would do a little look back models I've done for other armies.  Today I'm sharing a set of Ultramarines that I've worked on for a good friend of mine, Pesmerga.  He quasi-commissioned these pieces as a way to add highly detailed centerpiece models to his army and I took them on as a way to both fund my own projects and break the monotony of what I had been working on at the time he sent them my way. 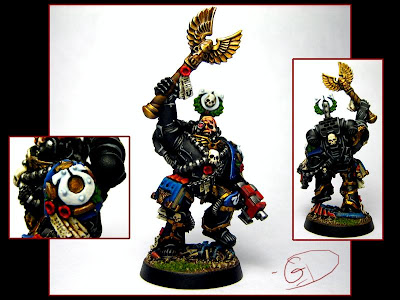 They weren't all done at the same time, in fact each model was done months apart with at least a month of them sitting on my table catching paint when I could find the time.  This is most apparent in the different shades or tints of blue that find themselves cast across the set.  I was more interested in getting a basic feel of the Ultramarine scheme while maintaining my creative inspiration as I moved forward with each. 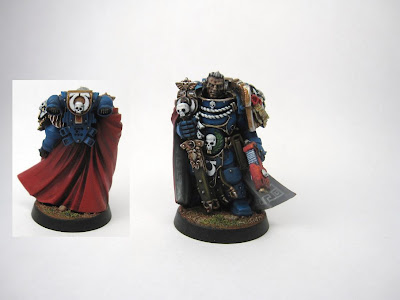 The tie from model to model was less important as I painted each.  The last model being but a distant memory by the time we worked out the next piece for commission.   It left me open to just try new things and play with the paint.  The Terminator Chaplain was one I had taken special pleasure in painting, as it wasn't until I was near complete with the model that my friend showed interest in him and offered to pick him up with the addition of the blue shoulder pad and army insignia.  That model also won a painting contest at a local gaming shop making it all the more fun, and literally rewarding. 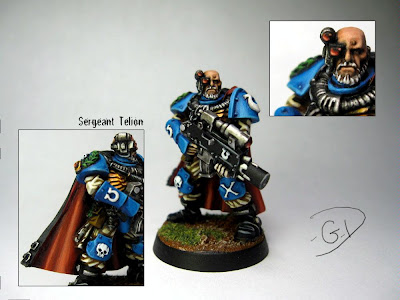 The biggest issue with them all was that they are all character models.  Games-Workshop, in keeping with tradition, has a habit of over-indulging themselves with a ridiculous amount of detailing packed onto their characters.  Making them feel more than just a little busy much of the time.  I did my best to work around this and keep them as simple in scheme as I could, or reference their 'Eavy Metal counterpart colors for ideas for approaching areas with details layered on top of details.
What I'm left with is a portfolio of great looking models.  My friend, however, ended up with some of my favorite work to grace his battlefields at the helm of his Ultramarine army.  The projects were beneficial to us both, and continues to be a source of new one off breaks for me.  Something I suggest everyone do as a way to build your abilities outside of your regular army paints!
Go!  Start a one off model!  You won't regret the project once it's done and you'll learn a hundred new ways to do things!  Get out of your habits and try new techniques!
Posted by Unknown at 15:20