A few thoughts on Power Weapons.

Recently, Mannahnin, a moderator on DakkaDakka.com, posted photos of an army he's working on and asked for some thoughts on how to go about painting the power weapons in the army. It really started making me think about all of the different methods there are out there for painting these essential battlefield weapons. And just what kind of thought people really put into making a decision on a part of your model that can truly make or break your piece.

Recently, in the past few months, I had been working on painting new models for my Space Marine army, The Grey Death Legion. I started off simple, a few marines with basic weapons. Then I began a piece that I really wanted to put a lot of effort into. A Space Marine Veteran converted from an Emperors Champion model. I converted the model and got him to a state I was finally happy with and started to painting him. All was going as planned, with lots of care put into the detailing of the piece. Then I hit a wall. How was I going to paint that power sword? In the past, all I had ever done was paint them a dark metal color and be on my way. But this wasn't 6 years ago. I'd learned how to paint to a higher standard and wasn't about to ruin this great model.

So off to the internet I went in search of inspiration. Failing inspiration I was set to just copy a tutorial.

How did I want to paint my sword though?

Lightning effects are done to death, but with the right amount, it can give you a good effect that's pleasing and easy to paint. It's when people use it too much and it takes over the model as well as distract you from the detail that it starts to look garish and tacky. I found a rather nice and easy to follow tutorial in The Bolter & Chainsword's Modeling tutorial section. But it wasn't for me. I've seen it too much and am frankly sick of it.

Solid colors rarely look up to par, as most people don't put the time to properly shade the weapons, making the weapon look flat and toy like. Definitely not the look I was going for either. Although with the right amount of highlighting and depth, solid colors do look good. For an example of a solid colored power weapon that looks spot on, I redirect you to Lemmingspawn's Iron Warriors. Skip to page 7 to see what I am talking about.

I ended up going with a random tutorial I found over on CMoN. It was originally touted as a force weapon method. The tutorial in question is a sort of 'wave' effect. I gave it a go and my results were less than satisfactory. 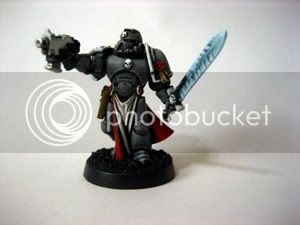 The issue's I had using the tutorial were that my surface wasn't flat like that in the tutorial, and the surface area just wasn't great enough to get the same effects. But it did open my eyes beyond what I had thought were the only ways out there to go about painting power weapons. And so I set out to find more inspiration to finally help finish my model.

I did lots of digging through websites and finally, after hours of searching, I found something I really wanted to give a try. This photo showed a way of painting them I hadn't seen prior. This was also a way I could really push my skill as a painter, as I knew that painting the weapon this way was going to take lots of glazes to get right. But in the end I was extremely happy with the choice I had made . 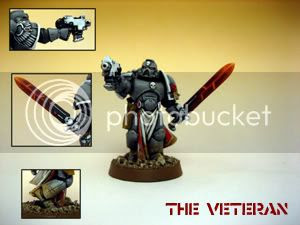 Some Additional Thoughts on Color
Another thing I see a lot of folks do is to pick a color completely outside of the palette they've used on a model to that point. And in a lot of these cases, it only hurts the piece as a whole. Take for example, my veteran above. As you can see, I was falling into this thinking trap of going for a color that doesn't really fit for the sake of making a weapon that stands out. When really I should have been looking to limit my palette to the colors I've already used on the piece. When you make a color decision about a major detail like a power weapon, take a step back and really look at the colors you've used to that point. Even if it's the smallest detailing (for example, the highlighting of my gems for my Veteran), you can still bring that color to the front and really incorporate more of it to help tie everything together.
Posted by Unknown at 16:41