After surfing some Black Gobbo back in the day, I noticed a nice little how-to and decided to give it a go. While the article is lost to the warp after the purge, it's spirit lives on in this tutorial.

Have to say, I'm rather impressed with the results for such a quick and easy project. I chose to use it on a small simple wall to try out some techniques I might end up using later on for terrain on my table.

I started off using just a small bit of pink insulation foam that I had laying about. I decided to start with a reliable old sharpie marker to get the lines down. Well, after finishing all the line work, I went to begin cutting into the foam and where there was sharpie, there was no longer nice solid foam, it ate away at the foam just enough so that when you cut directly into the line, you pulled up all the sharpie mark instead of making a neat little cut. So long story short don't use sharpie on foam projects!

After the sharpie failed me, I went back, cut out a new piece, and snagged a ball point pen. I lined everything out which ends up taking longer than one would expect to get the 'rocks' lining up properly! 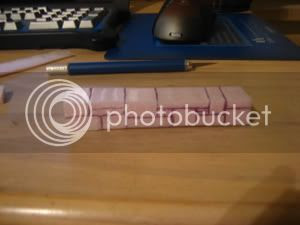 After lining I got to cutting in the lines. To start out I just cut a thin shallow line right on top of the drawn lines, then I took a pencil and pressed it into the cuts. This really doesn't work as easily as you expect it to. You've gotta really get in there with the pencil and go over the same spots multiple times. I ended up pulling the knife back into service in a lot of spots that were being stubborn. I weathered them a bit by trying to sand out some corners, but again, not the greatest of results from this. Sanding is awesome on most materials/projects. But for this one, it just seemed to texture the foam in a way I really wasn't too keen on. So I don't really suggest sanding all that much. I would just stick to the knife on this one. After trying to sand, I cut out some corners, and added some cracks and divots to complete the weathering. 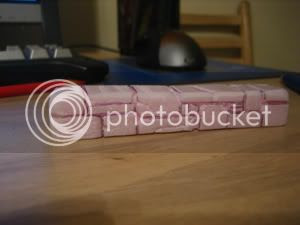 Remember, Spraypaint Melts Foam, so be sure you don't go nuts with the spray can. I used a bit of dark interior latex paint I had been using on my table project for a basecoat here. Marines in for scale of course. You can, of course, coat the entire project with a thin layer of White Glue should you really need to spray though. 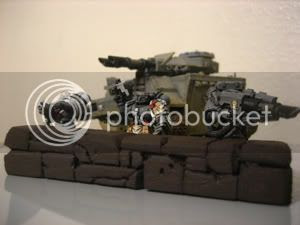 Then I set to painting. I went with a Codex Grey base with a Fortress Grey highlight around the edges and cracks, and very lightly drybrushed all over with Fortress as well. I added some weathering around the base of the model then with Bestial Brown, very lightly highlighted with Snakebite Leather. Using a very thinned out wash of Chaos Black, I added 'drainage' from cracks and divots. After it was all said and done, I did a quick drybrush over it all with Bleached Bone. 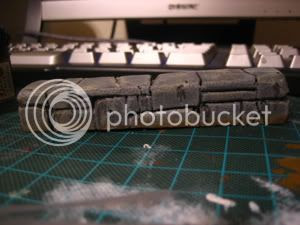 When the paint was finished and dry, I pulled out the Woodland Scenics Blended Turf I've had sitting around for years. To add this simply paint on some White Glue and dip it into the flock. I found that it took two or three dips until I wasn't seeing wet glue spots. 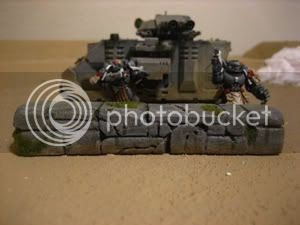 And it's done! Wait for the glue to finish drying and hit it with a quick Matt Varnish.

All in all, a really easy but effective method. It would definitely work wonders on a full building or ruins. I suggest you give it a go.

Here's another try with the same method. I ended up skipping the pencil step for this piece and just cut into the foam at angles to get the separation for each stone. I wanted to try and get multiple levels on this one, making it feel less like a big pillar and more like a defunct wall section. It's just as thick as the last piece, if not thicker, but it looks more natural than the last one. I'm happy with the results for the time invested. 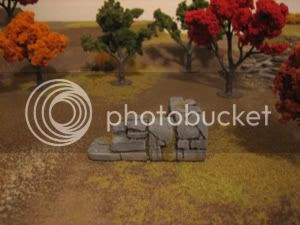 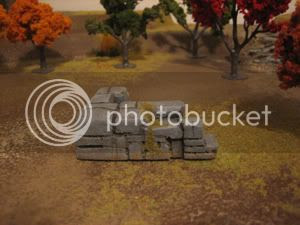 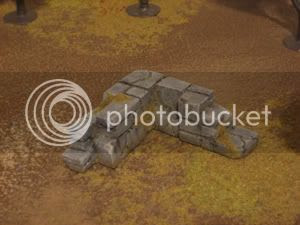 This was merely a time killer, again not a finished or completed piece, but it does it's job as an easy quick piece of terrain that can really spice up a battlefield.

This technique and material has far ranging terrain and modeling possibilities, and it really a great way to build your terrain collection in a short amount of time. If you've done something similar, we would love to see it! And any tips you might have to share are always welcome as well!

Email ThisBlogThis!Share to TwitterShare to FacebookShare to Pinterest
Labels: How To, Modeling, Terrain