Today's Quick Tip is more of a declaration; a result of a realization I recently put together. The light shone down and all the past little tid bits and pictures I've seen in the past suddenly came together into a realization.

The Ork Trukk is the best model that GW makes.

Here's the thing: in an army there's all sorts of fighting vehicles and most of them are well represented. But when an army goes to war there are probably just as many support vehicles as there are tanks. And army needs trucks-- trucks of all kinds. And while there are big tanks, little tanks, grav tanks, open-topped tanks, APCs, and all sorts of self-propelled artillery pieces made by GW there aren't very many trucks.

Luckily the Ork Trukk is extremely flexible and makes the basis for everything from four wheels to ten. Here are a few Trukks that have inspired me in my latest creation. 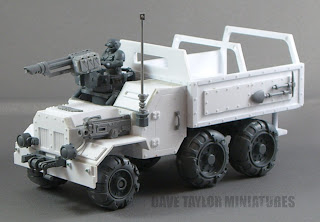 Dave Taylor's Ork Trukk reversion was one of the first conversions that started me thinking about the potential of the Trukk. Dave's vision was to create the original Imperial Guard truck that was the basis for the looted Ork Trukk. He's since started a three part tutorial and set of downloadable templates for this conversion. 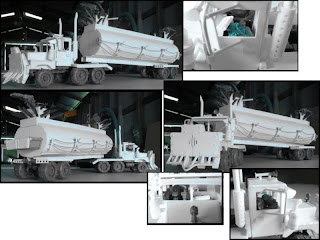 Another fantastic Trukk conversion is Warboss GargDregga's Tanker Trukk. Multiple Trukk kits and extensive plasticard and tube was used in this incredible piece. 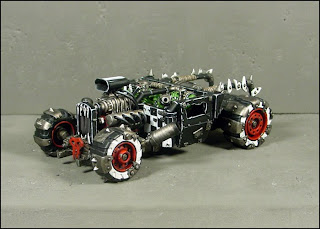 The Trukk is good for more than 6 wheel trucks, too. By inverting the axles, removing one of the sets of rear tires and cutting down the overhang you get a real nice car chassis. kenshin138's hotrod styled Trukk is a fantastic testament to how flexible and recyclable the Ork Trukk kit pieces are. 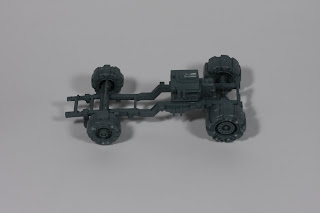 Here's the basis of the car conversion. In this case I've mid mounted the engine for my Formula Waaaghn project. Movement of the gas tank is optional, the key is to mount the axles upside down to get a lower vehicle. For this car I also cut the frame to fit the axles since it was too high below the frame and too low when mounted above.

To balance the ride height adjust the angle of the front axle to get the rank that look to you. Don't glue the wheels until the axles are glued and secured. Once the axles are set you can rotate the irregular shaped Ork wheels to get and even balance on the car, so that each of the wheels sit on the road evenly.

I'll do a full write up on my car at a later date, but after building a few normal Trukks I just can't see anything but all sorts of new conversion ideas. Besides all sorts of military support vehicles, I can't wait to build an El Camino Trukk!

What other ideas are out there for truck-based vehicles? And if you think there's a model as flexible as the Ork Trukk, let me know!
Posted by Real G at 10:00