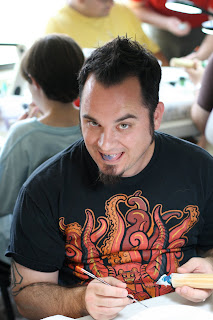 Masterclass Austin has come and gone and it was as awesome as I expected.  In case you missed my previous post on the class, multiple Golden Daemon-winner Mathieu Fontaine came down to Austin (we bribed him with BBQ) to give us Texas folks a little schooling on the finer points of miniature painting.


The class itself is a two day affair: Saturday we got some instruction on a few basics and worked on blending, cloth and flesh tones and finished the day with instruction on color theory and a little art history.  Sunday's lessons were on faces, metallics and a few details like tattoos, scratches and blood.  Even though we had twenty hours, the Masterclass was as jam-packed as Mathieu's four-hour class I took at Adepticon.  The second time in one of Mathieu's class I was able to absorb more information and pick up on a few things I missed.  Of course, there was a lot of new lessons to process as well.

If you are interested, check out his site for more information on how to get Mathieu to teach a Masterclass in your area.

Here are a few pics from the event. 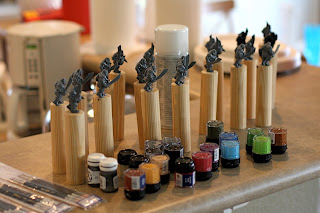 We painted GW Ogre Bulls; here they are all setup and ready to go, with some other materials for the class. 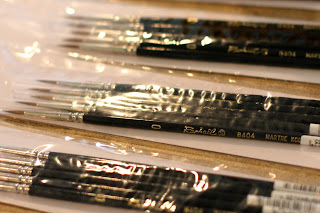 All of the students got a size 0 Raphael 8404 as part of their tuition. 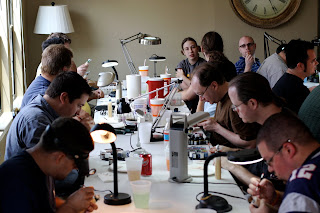 A shot of one-half of the group.  We were in two lines of tables, back-to-back, with Mathieu at his own table at the head (where the photographer is standing). 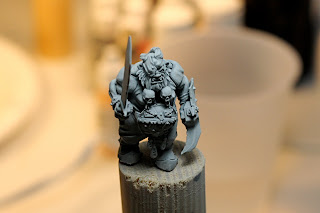 Here's my ugly dude after priming.  Notice the eye patch; that will be important later. 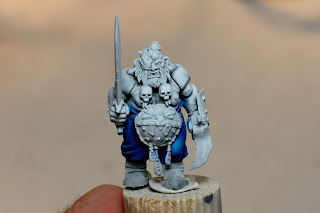 Working on the cloth pants.  Goatboy and I picked a nice "Under The Sea" color for our pants and more than one person suggested some coral, or possibly even a little Nemo, be painted on the back. 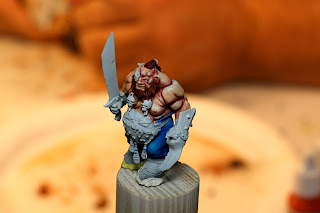 Working on the skin; much discussion had regarding "moobs" from this point on. 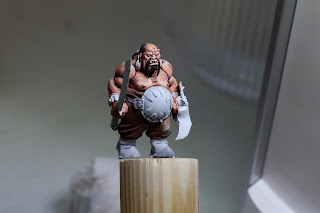 Another example of skin. 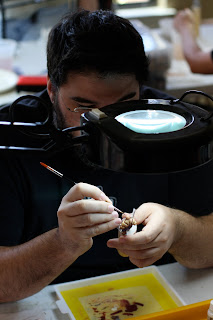 BDub working on his Ogre. 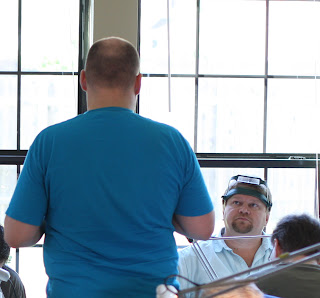 Mathieu giving some instruction and inspecting a student's model.  With a cap of twenty students there's plenty of one-on-one instruction.  Unfortunately my only other Mathieu pic is the classic top-of-his-head-while-working picture that you always get of painters. 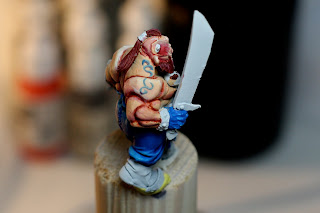 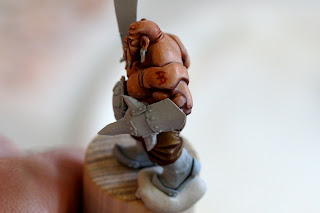 Being a Boston fan, BushidoRedPanda gave his Ogre a little different type of tattoo. 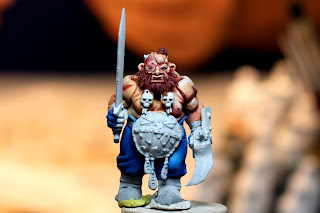 Since my model had an eyepatch, I only had one eye to work on when we came to that part of the model.  So as a challenge Mathieu suggested I free-hand an eye over the eyepatch.  And then the patch just didn't look right until I made it a nice flesh color.  Nothing like a meat-patch for an Ogre.

I want to thank Mathieu for his instruction and all of the students that made the class easy.  We had a great group.  And who knows, maybe we'll be having Masterclass II in Austin next year?
Posted by Real G at 17:00