On The Table: Beastman WIP 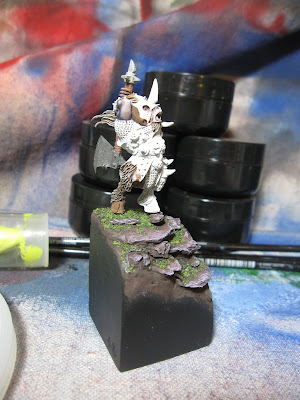 It's not much of an update for him, but I think it's appropriate considering the direction I've decided to take.  Don't pay much attention to anything but the base and the skin right now.  Everything else is just blocking out color to get an idea.  But the skin and the base are two major breaks from the norm for me.

With the base I've gone with a much more elaborate set up and far more dramatic coloring than I've ever used in the past.  I've yet some more work to do still though, mainly in the variation in the vegetation that will be achieved with some paint washes.  There will also be some additional flora added to drive home the look I am going for. 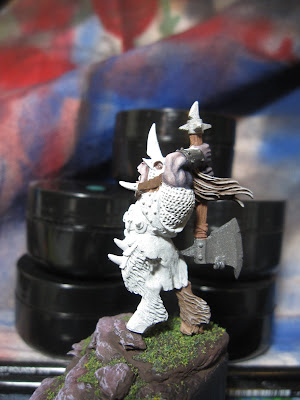 The skin is within keeping of the hues established with the basing.  I'm also making a concerted effort to keep away from black for shading, using various colors to add depth to the model.  In the case of the skin, I'm going with a very deep blue with some red mixed in for a dark violet that will contrast nicely.  In the finished model this will end up looking much darker along side of everything else, but right now it still feels very blue.  If that's the case later, I'll add a little brown to the depths to punch the contrast up even more.   All of this with an eye toward the lighting I've predetermined earlier in the paint!

It's going to be a long project I think.  Hopefully you all don't mind coming along for the ride!
Posted by Unknown at 08:00