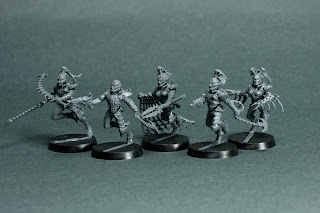 As a long-time Eldar player, I've always stayed away from the Dark Eldar range because the models were mostly metal and almost entirely terrible.  That has changed with their re-release and the new plastic models are simply fantastic.


Tasty Taste over at Blood of Kittens just named the Dark Eldar Wyches the "Best Multi-Plastic Kit" of 2010.  While I'm not as eager to crown it the best kit, it is certainly one of top few produced by Games Workshop this year.  With a great number of variant parts, as well as weapon options, it is amazing what GW fit on two sprues. 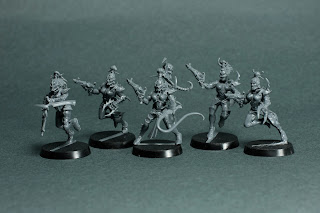 You also get ten slotta bases, because as you might have noticed, these are plastic slotta legs.  There really is no way to avoid a slotta base with these models (because of the dynamic poses of the running legs), so you'll have to get out the Dremel and grind some slots if you intend to use scenic resin bases for your Wyches.

The limiting factors are legs and front torso pieces, since you only get ten of each.  It would have been great for GW to add one more set of legs and front torso so you could create a full squad of 10 Wyches and a Succubus to lead them, but the "Ten Legs Standard" is pretty firmly ingrained into GW kits that this limit isn't a surprise. 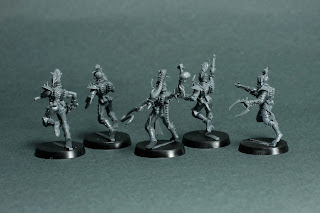 While there's a lot of conversion potential in plastic kits and all the left over bits, the kit is best used to make Wyches.  In game terms, the kit was designed to make all the Wych variants: normal Wyche, Hekatrix, Bloodbride, Syren and Succubus.  The arms and legs fit the new Dark Eldar plastic range (and even the new metal models) but the nature of the Wych model makes them unsuited for wide-spread use.  Wyches only have armor on their left arm-- the close combat weapon arm.  The armor is not quite the same as a Warrior, and doesn't quite match the metal Archon model.  If you are looking for a power weapon or Agonizer for your Archon, look at the Warrior box instead.  The left Wych arms are bare, so the Blaster Pistol sports a sleeveless look that will be out of place on a Warrior, Archon or Trueborn model.

That complaint aside, it is a great kit with well placed mold lines that make clean-up easy.  There is a lot of variation in the knives and pistols and tons of posability so it shouldn't be difficult to create your own unique group of Wyches. 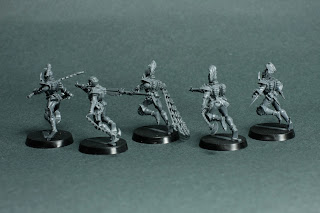 Have you played with the new Dark Eldar yet?  What do you think of the new range?
Posted by Real G at 08:00