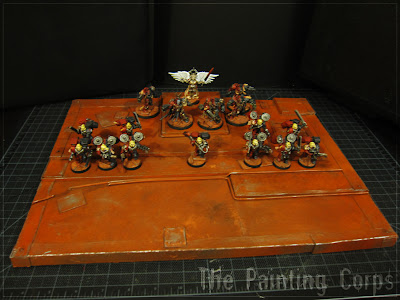 It's been about two weeks since I finished the latest additions to my Angels Sanguine force.  I had been working so feverishly to complete the two squads of Assault Marines before a gaming weekend at a good friends house that I found myself burning out a little from the push.  In the end, I did get them completed before heading out for that weekend and they saw themselves on the table fully painted and ready to rip his army and others to shreds. 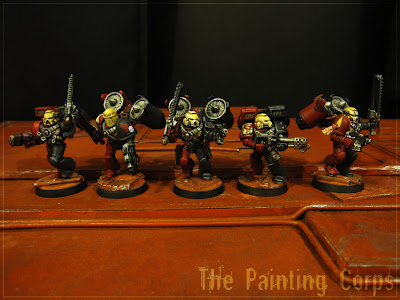 The big hurdle I found myself waiting on was the display board that you see above.  It's always important to me these days to show models in an environment that makes sense.  With only my desert display base from my Sons of Medusa on hand, I didn't want to do 'final' photos without something to help show them where they are intended to be fighting.  The display base was built up using foam-core poster board to create the levels.  When that was dry and solid, I used a cereal box chopped up to create details and cover the edges of the foam core.  I also had a few large rivets left over from an old project that I glued in a few spots.  Pipes are round plastic modeling tubing from a model railroad shop.  If you've never perused a model railroad/fine scale modeling shop, you really need to get in there!  The inspiration flows freely from those shelves and you would be hard pressed to not find something that you need or have a great use for! 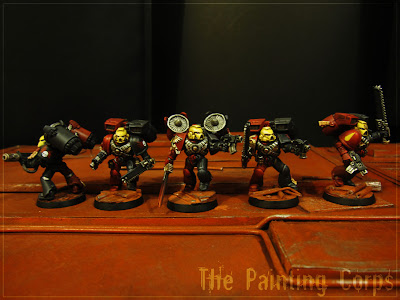 With the Assault Marines finished, the army finds itself hovering right around one thousand points using one of the optional models (a plasma pistol marine) as a sergeant and pushing the thunder hammer sergeant up the promotion ladder and running him as a temporary Space Marine Captain.  There are a lot of high point units here and it's not going to get any better since I'm going to be adding more Terminators as I get more of my Space Hulk terminators completed and really begin to dig into my newly purchased Blood Angels Battleforce currently sitting on my shelf! 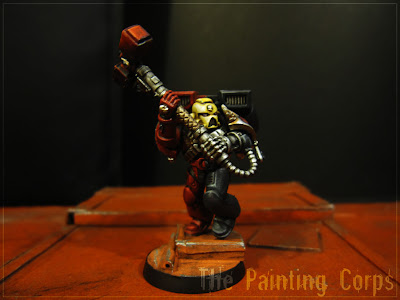 The marines all follow the basic scheme from before, but with a few small changes that I have laid out here.  Going with codex style helmet colors really helps me to break things up from what could have been a very monotonous force, especially when taking the dark nature of the armor into account.  With these little bright spots of yellow helping to catch your attention, the eye is brought around the entire force instead of just getting lost in a single unit. 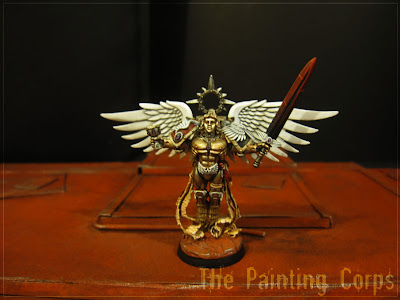 The Sanguinor really shines out in the army as well, but still falls in line with colors and ideas laid out elsewhere in the force.  He comes out even more when viewed on the display board.  His white wings a good contrast to the dark and brooding models around him.  If you're wondering about how I went about painting him, check out his Reinforcements article here. 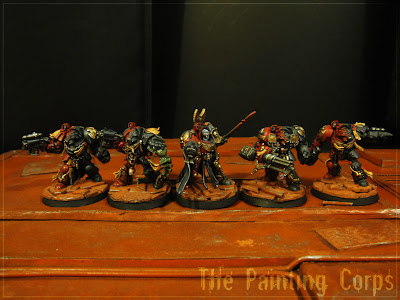 Even the squad that started the whole thing looks new and fresh when placed in an environment that I've been imagining for over a year now.  This squad, these models, the Space Hulk boxed game, are everything I love about this hobby.  It's how inspiration can come from a game purchase and seed exciting new ideas that will occupy your time for months to come, all without you ever knowing it was going to happen that I love.  I don't think I would have ever seen myself building an army like this had you asked me 3 years ago.  But that's how the hobby can take you over.  Some days you're just a conduit.

Thanks for taking a little time out of your day to look at my humble offerings to the hobby gods.  The army is going to expand but it might be a little while before I find myself digging in with a new squads worth of models as I get life in order in the coming weeks!
Posted by Unknown at 08:00