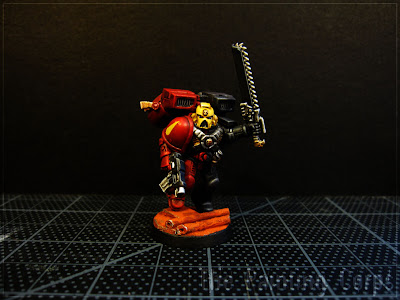 To give myself an idea of how the basic troop for my Assault units will look, I took a marine from the unit I've been working on the last few weeks and painted him to complete.  It didn't take much doing as the majority of the work was already complete.  The main things I had to do were gems and detail work.  Metallics were given a touch up and black areas given highlighting.

The marine follows the majority of the color scheme laid out by the Angels Sanguine Terminators.  But with additions of the yellow which was done through GW Iyaden Darksun followed by a highlight of 50/50 Iyadend Darksun/Ivory and a final Ivory highlight.

The shoulders were also done to help lay out colors and ideas for the army.  I've gone with Second Company markings for this force, so yellow teardrops on the right shoulder.  The left shoulders will have chapter badges, but because of how odd the placement is for this guy, it was hard to get right, plus, I wasn't really happy with just how it came out, so I will have to continue to work on the approach for the badges in the future.

The base used rust colored pigments mixed with VMC Matt Varnish to create a crusted and rusted look.  I drybrushed this with GW Boltgun Metal along the edges of the plates.  Mixing in more pigment brings out the matt/powdery look of the pigment while adhering it nicely to the surfaces.

I will be sure to do a full write up for the color scheme and how I approached everything when I post the reinforcements for the finished squads.  Here's hoping a few tips come out of this force!
Posted by Unknown at 09:14