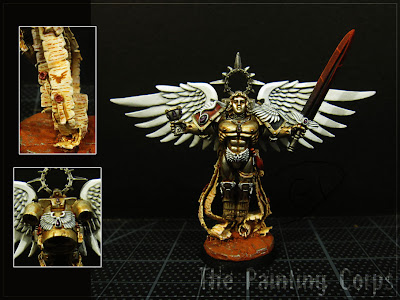 Early mornings these last two weeks have found me getting more accomplished.  Completing new Space Wolves in the form of Wolf Scouts last week and a Rune Priest this week was a good break from the black and red of my Angels Sanguine.  This time around, I've found time to finish my Sanguinor that I was lucky enough to win through a random giveaway by Santa Cruz Warhammer a while back.  It's good to finally get this model finished after having him shelved for so long and I hope the paint does the model, and their generosity, justice in the end.

I wanted to keep with the basic scheme laid out by GW in the Blood Angels Codex, while at the same time bringing a few details from my Angels Sanguine color scheme into the mix.  The golds are placed the same as the GW scheme, while using the same gold colors that I did for my Terminators.  The power sword, gems and purity seals also followed suit.  White areas were really the only detail that I had to add that isn't used elsewhere in the army.  I also went in with the army colors for the shoulders as well after noticing GW was using reds on them for a little spot color.


The paint the gold, I used washes as usual, but started with a base color of GW Chainmail, followed by a highlight of GW Mithril Silver, washed with GW Gryphonne Sepia twice, highlighted again to keep the raised surfaces brighter, washed again with Sepia, and to finish the model off I did a very slight highlight with Mithril Silver.  In the end, it has plenty of depth and still maintains the brightness on the raise spots that I wanted.  It ended up a little on the warm side, but fits in nicely with my golds elsewhere in the army.

Scroll work was done using the same colors that the terminators used, but with a little more care.  It was a base color of VMC Ivory to opaque, washed with Gryphonne Sepia, Highlights and striations laid down using VMC Ivory again and a final highlight of GW Skull White added as a striation highlight.  The writing was done by using watered down GW Bestial Brown and a careful touch and sharp pointed paint brush.  I used a standard size GW brush here and it works very nicely because of how well it can hold paint and how sharp the tip of the brush can get.

The sword was done by painting the blade in GW Chaos Black, lightly glazed to create a smooth gradient of GW Red Gore from the hilt to the blade edges and tip.  GW Blood Red was then used along the edges to start the line work you see in the photos.  GW Blazing Orange was used to begin the highlights of the edges, followed by a lighter 50/50 mix of GW Blazing Orange/GW Skull White.  To tone everything back down and create the final look, I used a few glazes of GW Blood Red, again, in a sort of gradient manner.  I do think I need to get a real tip together for this, likely a video, as it's hard to explain without being able to show how light the glazing layers should go on.  It doesn't take long to do, but looks fantastic in the end.

White areas were actually quite fast for this model.  Having primed in white, I just washed the areas or painted them in GW Fortress Grey.  Then when dry, I used GW Skull White until the area was opaque white.  Far less time intense than I expected it to be. 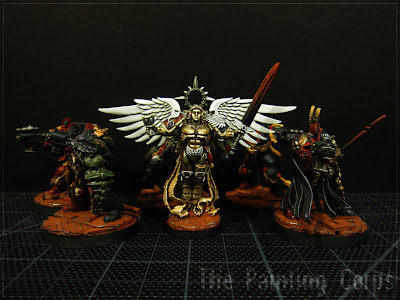 Now that the Sanguinor is complete, I've just the two squads of Assault Marines to finish up.  I'm really looking forward to having them completed as well and being able to field a fully painted Angels Sanguine army.  Additions from there will include a Death Company squad with jet packs, a Terminator Librarian and more terminators for the unit already completed.  Thankfully, the only thing I need to actually pick up is the Death Company unit.  The Librarian and other terminators will be coming from the same Space Hulk set that started it all!

I'm getting more excited about having this army rounding home and being fully painted for games.  The test game I got in with them didn't disappoint me as to how they perform.  This army is a complete change to the way I've always played and it's exciting and fun to think of the possibilities.
Posted by Unknown at 09:28