On The Table: Bases Sanguine 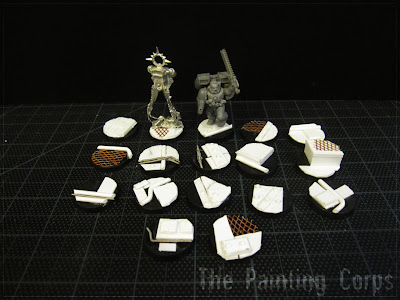 I've been mulling over the idea of getting my Angels Sanguine built up into a proper army at long last and have been slowly collecting bits as well as putting the models I plan to use for them to the side.  I've accumulated a good amount of models so far and am planning one last purchase or two that would get them off and running, not to mention fieldable!

For now though, I've taken some time today to crank out a fair amount of bases to save some time down the road.  They're a take off of the work I've already done with my Angels Sanguine Terminator Squad that I made use of the Space Hulk terminators for.  The basing scheme worked well and quickly for them, and works even faster for regular models.  In the end it's a Ork Hulk/Krooza feel and that's something I'm more than happy with!  I've even taken it a few steps further this time creating elevated platforms on two that were built up making small box shapes out of plasticard.  All around it's a variety of plasticard thicknesses, tubing, guitar wire and Contour Mesh

for texture.  Rivets were also added that I made using a punch.  I did consider using my tiny rivets, but ended up liking the chunky feel to the big ones.

I'm not certain when this army will see full out build and paint sessions yet, but this was actually a nice breather and allowed me to just play around with ideas while sticking to the theme.  It also let me knock out what could have been a speed bump from unit to unit in a part of a morning!  Getting 17 bases done, including one that fits the slot for my Sanguinor ( Thanks Santa Cruz Warhammer! ).

A single Death Company box should get this army going nicely, and with the bits I've already picked up from the box from Battleroad Games' Ebay shop, I'll have enough cool stuff to help deck out my Assault Squads as well!

With so many bases it's going to be hard not to start modeling the assault squads right away!  Anyone seen any cool basing ideas around the web lately?
Posted by Unknown at 08:00