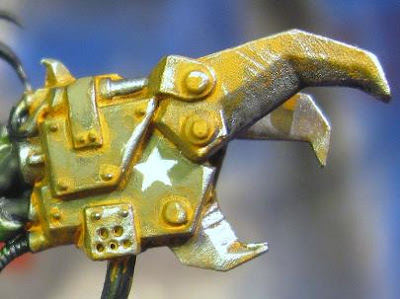 Some time ago we covered painting rust with just two colors, and at the time I thought I was happy enough with the result, but since then I've found myself more given to a more natural look than the stippled effect I suggested.  This tip will go over a few things I've found myself doing when applying rust in the updated method. 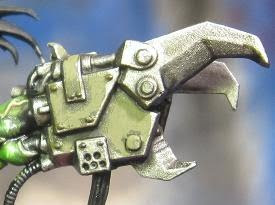 As my jumping off point I get my metallic parts to a single washed shade.  In this case I've painted the power claw with Boltgun Metal.  The green is VMC Brown Violet painted on in splotchy fashion to create a chipped look straight away.  The entire claw was washed with GW Badab Black and the green was then touched up in a few spots with the Brown Violet to add some depth. 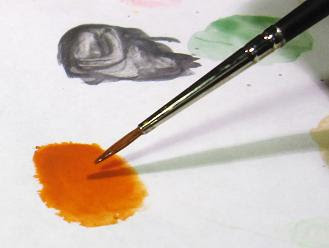 Some people might not have a grasp of using regular paints as a wash but it's really quite simple to do.  You simply need to take your given color and dip your brush in, then using a good amount of water, thin the paint down to a consistency like above.  I usually only dip the tip of my brush in the paint, touch it to my palette and then load my brush with water.  Swirl your brush through the paint until it has an even consistency and load your brush with the mixture. 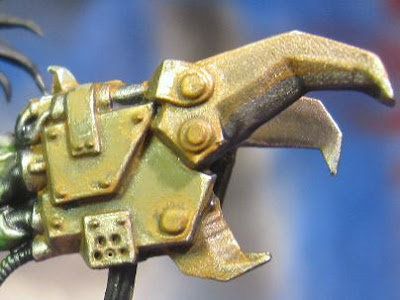 The first color washed on is Vermin Brown.  In this example I've actually gone too light and would likely make it heavier still than this.  This layer though acts more as a filter for the areas you are going to build up more with your second color.  Pay special attention to spots unlikely to have much wear and rub, like around bolts and along joins of armor plates in the crevices. 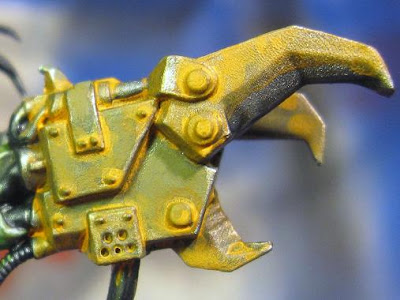 The second wash is made of Fiery Orange in this example, but should you not have it on hand, any light orange would do just fine.  Again paying special attention to areas not likely to be worn down too much or those that would gather a fair amount of moisture, I applied the wash heavily and after the initial pass was down, I went back to some areas and stippled more of the wash mixture in.

To finish the effect, I've gone back in with Boltgun Metal along a few edges and touched up the Brown Violet again.  The added detailing of the star was painted freehand and will likely still get a few scratch marks painted in with Brown Violet.

In the end, the effect is far more natural and more controllable.  It's also more conducive to batch painting that I'll be using to finish off Pattun's Boyz!  Now, to finish off the rest of the model...
Posted by Unknown at 00:07