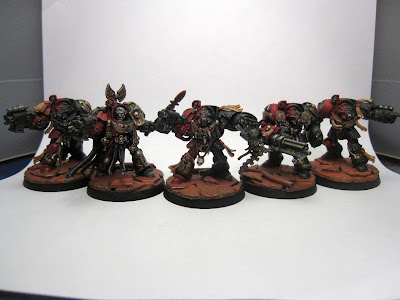 After some marathon painting sessions, the last of which I pulled an all nighter, the first squad of terminators are finished for my Angels Sanguine.  I painted the four new models all at once to save a little time along the way, and while I'm sure I did, it started to bog me down some when it came to the details.  Early on the batch painting was showing it's bonus.  The base colors went down quickly and efficiently, even highlights weren't an issue, but when I got to working on the metallic sections things slowed down considerably.  But in the end, I've got four models to complete out the squad! 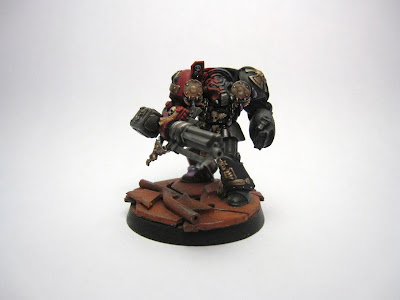 The basing was developed more with these models and additional bits and extras were added to the mix in the form of plastic tubing and metal mesh.  All of the models are magnetized for double duty on the 40k battlefield and in the confines of a Space Hulk.  I believe the look I was after was successfully captured with them. 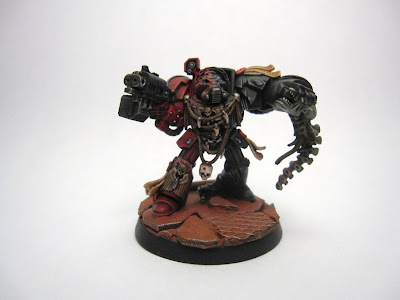 The genestealer spine was a big bonus in painting the above model.  It gave me a chance to lay out an idea for my genestealer color scheme without committing to an entire model.  I didn't want to just go normal 'stealer colors for them, and wanted to give a truly alien feel while keeping them grounded in a realistic palette.  I went with a VMC Brown Violet base highlighted a few times by mixing successive amounts of VMC Ivory in to a very thin highlight of pure Ivory.  I went back in with Thraka Green and washed everything and when dry, I hit the fleshy bits with Devlin Mud.  For the gory bits I mixed Devlin Mud with some VMC Flat Red and washed it on. 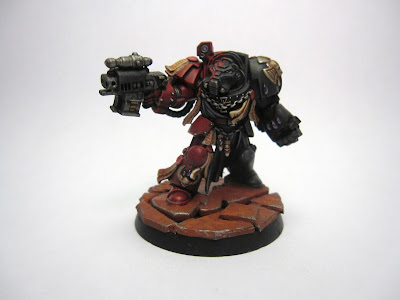 Each terminator followed much the same 'recipe' of the first terminator I finished.  It was actually a bit hard to get the colors to match just right, mostly because of the difference in the base zenith white/black base coat.  A bit too much white lead to my models being a bit brighter than I had intended.  A few additional washes helped to tone the models back down, but left them extremely shiny.  I had to use painted on matt varnish, watered down of course, to kill the shine. I hope to work out that issue with the next set of Angels I work on. 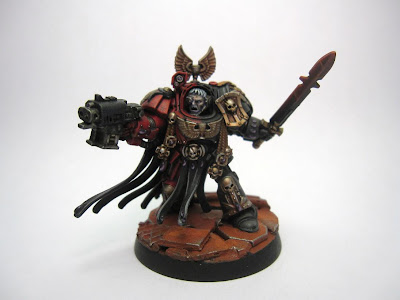 The face on the sergeant was a point of concern when I started this project.  I wasn't up for doing a head change to 'fit the fluff' but figured I could give the model a disturbing look to attribute the fluff to.  I went at the face by first painting VMC Ivory and then washed it with a violet I mixed up from VMC Medium Blue and VMC Flat Red and watered down.  I started picking out the details in thin layers of Ivory and eventually washed it very lightly to punch up the contrast with Devlin Mud.  The eye was painted in with a pale blue to give it a cold almost dead look with no pupil to help reinforce the idea.  I'm really really happy with how it all turned out and capped the head off with by painting the hair with VMC German Grey and picking out the details, along with creating some, with pure Ivory.

I can't wait to start on another squad for these guys, the color scheme is just so striking when finished and was actually a lot of fun to paint.  I've got a Sanguinor on the way from Santa Cruz Warhammer that I'm looking forward to painting up for the force as well as some Assault Marines I've had since BoLSCon waiting for an appropriate project to come along, not to mention the rest of the Space Hulk Terminators to finish off!  For the moment I'll be taking a breather and finishing up another piece that I've been holding off on for a while now.

If you've got a question feel free to leave it here in the comments section!  C&C is as always very welcome!
Posted by Unknown at 17:44