On The Table: Sons of Medusa Terminators 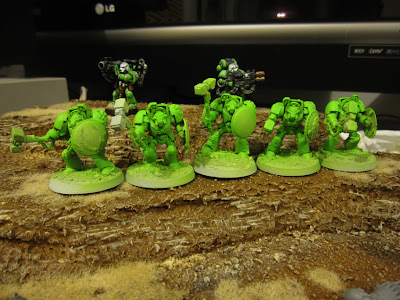 I've been wanting a set of terminators since I started my Sons of Medusa.  A big bad block of awesome that could put major problems into an opponents battle plans and eat up a ton of points at the same time.  I even went ahead and ordered a set of Black Lotus Tribe shields from Maxmini.eu near as soon as I started the army.  I had wanted to use round shields in place of the normal terminator storm shields.  But when I got a set of terminators, they were caked with paint already and when I went to spray them once more, the spray fuzzed up on me.  My attempts to remove the paint were futile at best and I decided they were too far gone and relegated them to the bits bin.

Over the last week I decided to try and salvage them once and for all.  A few good scrapes with the hobby knife and some sandable auto primer later and I was pleasantly surprised that they came out the other side looking a touch alright!  There are a few pits here and there from uneven paint but nothing that won't cover up nicely with a little of my paint weathering!

I'm trying another method for painting my Sons as well.  Instead of going with the PS-8 Tamiya Spray I've used before I'm going to be using airbrushed Scorpion Green.  The wash I use will still be Thraka Green to add some depth, but I'll be using the wash much more sparingly.  The rest will likely be near the same as everything I've painted for the force so far with maybe a few tweaks here and there.  The shields will likely have a few areas of freehand, to include an homage to the original Sons of Medusa chapter emblem. 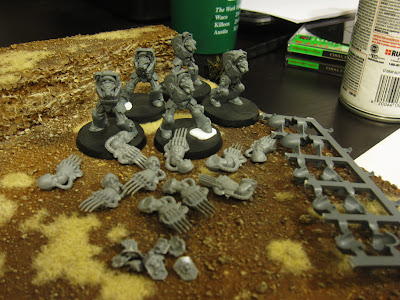 I've also got another set of 5 terminators that I'll be loading out with lightning claws.  I was able to finally snag a set of shoulders for the squad after having them in limbo for going on two years now!  I picked up the squad as a trade at a bits night but they were sans-shoulders, I had been meaning to get a set online but just never got around to it.  The other day, I asked around and was able to get a set once and for all from a DakkaDakka user, AgeofEgos.  A big thanks to him for helping me finally get this project going!

I have a lot of painting to do yet, as well as a good amount of modeling.  There is even another land raider to put together still to cart the second squad around in!  It's a long way off from completed, but I'm dying to get started!
Posted by Unknown at 08:00