On The Table: Long Fangs and Scouts 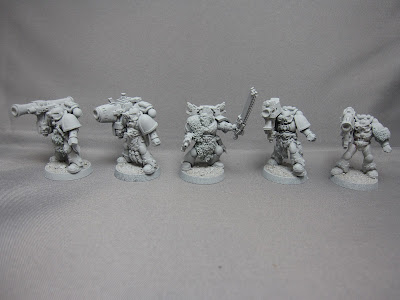 After their first ill-fated debut on the battlefield, my Space Wolves were found to be woefully lacking in any real power and serious effectiveness.  To help boost their combat abilities I've taken to adding new units to the army that aren't just hand to hand monsters.

First on that list was a set of Long Fangs.  The squad contains three models from a friends old army that I was able to clean up and remodel.  The lascannon trooper was one of my first models from my Grey Death army that had a clumpy and terrible paint job, not exactly something I was proud of having in my case.  The sergeant was built 'new' from a bunch of bits and spare parts I had in my bits box with green stuff used to create the pelts and a beard.  There is also additional green stuff pelt work on two of the devastator models that weren't explicitly Space Wolves models.

The biggest pain was hunting down old school arms for the right side that are needed to fit into the weapon.  New style arms just can't fit right without a lot of cutting and remodeling, not something I was keen on doing when I'm trying to make speed a major part of this army build/paint.  Once I was able to find them after digging around in my bits box, I was able to start looking around for a left arm.  I ended up just using chainsword arms, sans chainsword of course. 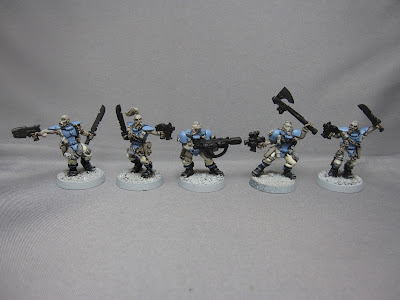 Wolf Scouts have always been a really cool unit to me.  Their story and their abilities on the battlefield have always made me want a unit of them.  This unit was put together using a bunch of unpainted models from that same army I picked up.  I've already gotten knee-deep in the painting process as you can see.  In fact this squad was started at the same time as Ragnar Blackmane, but the day after starting both, Ragnar found traction and the scouts were set off to the side to get him finished.  With the models around 30% complete, they don't have a ton of time left on the painting table.

So far they have kept to most of the same painting methods and recipes of the other wolves, the cloth being the only addition.  I used a Codex Grey base washed with Devlin Mud, and primary highlight of Fortress Grey.  Bleached Bone was then used to give the cloth it's true color and Skull White was used as a final highlight. 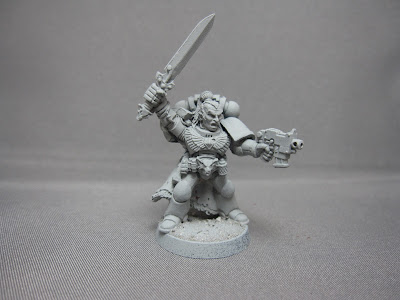 As a little bonus piece to the army, and since I've had the model forever, I went through my first model case (a fishing tackle box!) and dug out one of my first models.  This guy was part of what I had hoped would be a Space Wolves army, but as I've mentioned before, that never came to fruition and he was painted as an early member of the Grey Death marines.  Again, not a model I've come to use or be proud of after so many years and so I stripped the model down using Simple Green and a wire brush.  This guy will end up being a part of the Wolf Guard once I get around to painting him.

I've got a lot to work on, but I'm hoping to find time in the coming week(s) to get more done with this army and hopefully find a night to get a game or two in with the new squads. With classes starting back up, here's to hoping I can keep the momentum going!
Posted by Unknown at 09:00