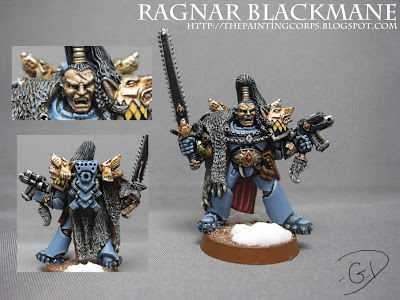 Back in the days of 3rd Edition, I desperately wanted a Space Wolves army.  The fates had a different idea as the friend who first introduced me to the game didn't have the colors I would need in order to paint the Wolves in their proper colors.  Instead I went with paints that would end up being my Grey Death Space Marines and hence my namesake for all these years!

After well over a decade I've found myself in the position, and of the proper motivation, to build and paint an army that's eluded me for so long.  With that comes the chance to paint some models that I've always seen and wanted to paint but didn't have the proper army to do so!  Ragnar Blackmane was always one of those models.  I tried to paint him some years ago while trying to build a Wolves army but didn't get past a single model.

I painted the model in nearly all the same colors and methods used for the squads of the army.  I also used this model to create last Fridays tip on painting Space Wolves armor.  The only change up from the regular recipes of the army was his wolf pelts.  For those I painted them Codex Grey, but instead of just Devlin Mud, I also gave the pelts a heavy wash of Badab Black over the back and shoulder areas of the fur.  The pelts were then drybrushed Codex Grey, then Fortress Grey, and finally Skull White, with each successive highlight lower and less intense than the last.

He's not a full out copy of the GW painted version, but I did steal the idea of his left shoulder wolfs head being gold with yellow detailing 'under' the head.  It was a small thing that I really enjoyed about the studio model and wanted to bring into my own piece.  Forgoing the other yellow details keeps him more grounded to the army and makes the model feel a touch less busy, which, let's face it, can be quite hard to do on the old 2nd and 3rd Edition models.

This model will likely end up being the man himself when played on the battlefield.  One of the first times I'll have taken a Special Character in any of my armies, and a helpful boost in the points department!  I look forward to seeing how he fares once he has a ride to deliver him unto his enemies.

Look for more Wolves to hit the table later this week!  I'm also seriously considering starting a terrain table that would be a lot of fun to build as well.
Posted by Unknown at 08:00