On The Table: Space Wolves WIP 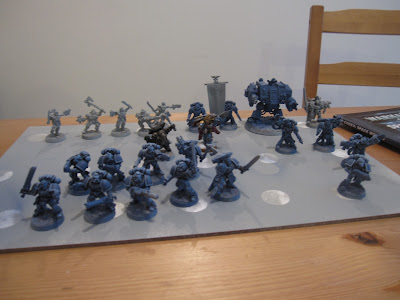 To keep this army moving forward I will likely be sharing a lot of the process of creating it as I go.   Things are going well enough so far.  Overall it's been pretty painless, with just a lot of armor painting in quick succession.  I have yet to delve into detailing each model, but will hopefully try and keep things going in much the same fashion as I have with the armor by going through every model with a single color until it's all completed, then moving on to the next color in the recipe. 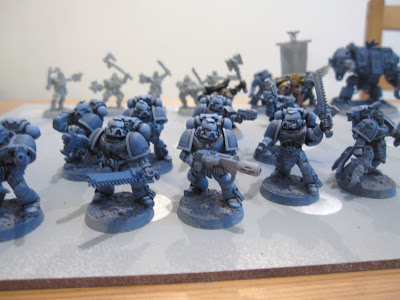 The army was airbrushed with Shadow Grey to start off.  I didn't go for the airbrush on some models, namely the scouts and Ragnar Blackmane as they didn't have quite enough armor for it to be worthwhile.  The armor was then given a Devlin Mud wash to the recesses, not all over the model, but specific point washing to give them some additional depth. 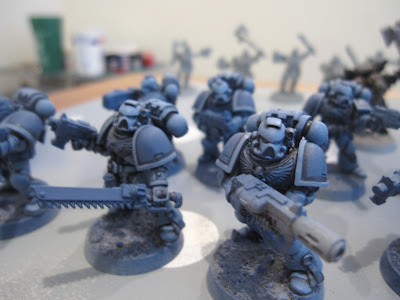 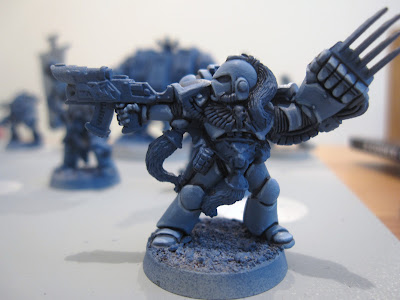 A final highlight is currently being applied to the models as an edge highlight of pure Space Wolves Grey.  Used sparingly and carefully placed it really drives home the Space Wolves look from the old school.   This step takes a little more time than I had expected, but it's mostly because I want to make sure it's done right so that the lines aren't thick and heavy and completely ruining what I was hoping for. 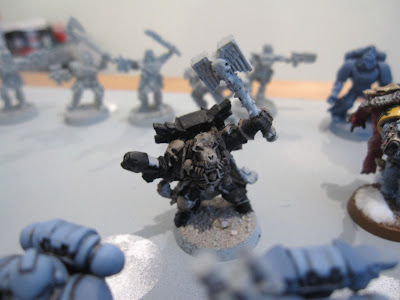 Ulrik caught a quick blacking out of the armor and a wash of Devlin Mud to help fill in the recessed areas of the detailing.  I've always liked this model, but thought he was ruined some years ago when my dog decided to give him a chew.  I stripped the model recently and was happy to find that overall he was still in good shape!  He should go quickly enough once I get to him though.  He'll likely be one of the last things done for the 500 point list though, if he makes it into that list at all!

Expect more quick updates like this along the way as I finish more in the force.  I'd love to hear your thoughts on the army so far, and any critique you might have along the way might find its way into the finished army!
Posted by Unknown at 12:02