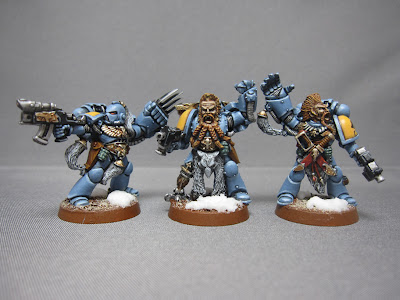 In just over two weeks ago, inspiration struck me after I had finished painting up Lukas The Trickster for a friend.  I dug around through a bunch of old models that a friend had given me many years ago and went straight to work on them.

With Dakkacon: Philadelphia on the horizon, I was able to use the drive of wanting a new force for it to really help me press on with the project and bring it all together in time to take the field of battle!  I finished up the army the night before I was set to head up and take part in a 500 point mini-campaign.  The army as is isn't worth writing home about, but a couple of tweaks to the list should be a big boost to the combat effectiveness!  At least they looked pretty getting rolled! 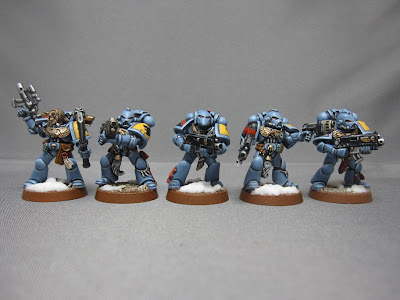 The entire army was painted all at once in an assembly line fashion.  I painted each model with a single color until completely finished with that color.  This method worked wonderfully for the armor and weaponry but really gets a little hairy when you get into details.  I found myself backtracking on a lot of small things that were missed when painting a previous color.  But once I was able to get to the bases the assembly line worked wonders again. 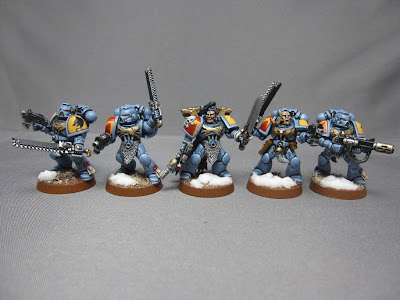 For the pack markings I painted the models in batches.  This was a point of concern for me as I spent a lot of time trying to figure out just what I wanted to do with them, even after getting them done I wasn't quite sure what I had painted I was going to keep.  I had even laid in bed that night considering repainting my Grey Hunter pack markings!  In the end though I felt they were strong enough to keep and easy enough to reproduce on future models. 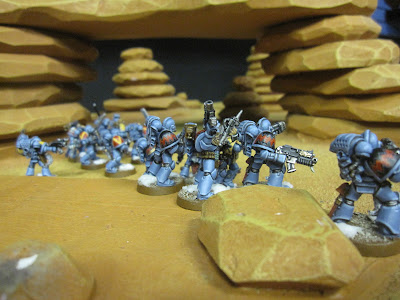 The fur was painted using a Codex Grey base color that was washed with Devlin Mud.  Once dry, I used the side of the brush to paint the raised surface of the fur with Codex Grey again.  Fortress Grey was then applied in much the same manner leaving some Codex Grey showing.  As a final highlight Skull White was applied even lighter. 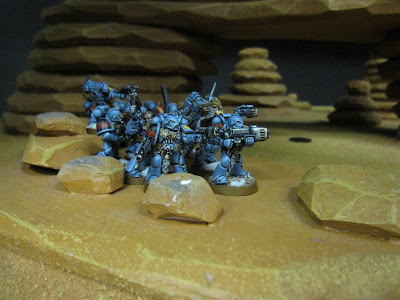 Reds are done by painting a base color of Mechrite Red, highlighting with Blood Red and given a line highlight of Blazing Orange.

Leathers were painted with Bestial Brown, washed with Devlin Mud and highlighted with Snakebite Leather.

The yellows were base colored with Vallejo Yellow Ochre, the surface was then painted with Vallejo Dark Flesh.  This was highlighted using Vallejo Flat Yellow.

Metallic bits were painted Chainmail and washed with Badab Black or Gryphonne Sepia respectively until the color or shade was right. 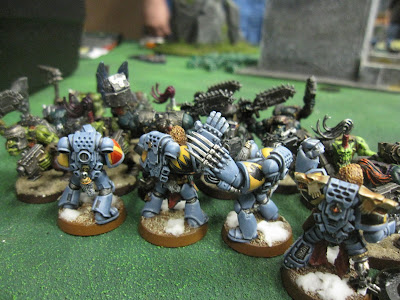 The orange/blond hair was painted Bestial Brown, highlighted with Vermin Brown and given a final highlight of Vallejo Dark Flesh.

I hope to keep this momentum going into more models for the army and hopefully into other projects.  This army was a eye opener for me into how much I can accomplish given a little free time and an event to paint for!
Posted by Unknown at 08:00