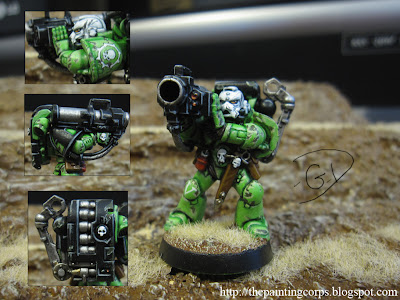 Getting a new model for my Sons of Medusa army finished is always a great feeling.  This is the army that I fell in love with from the start.  It's a hard color scheme, Scorpion Green and White aren't exactly colors that beginners should handle very much let alone build an army on!  Now with the release of Imperial Armor 10, they have a developed background and a brand new allure.

This guy was just one of a few wargear options I had laying around that didn't make it into the final army list.  Now that I'm back at the boys in green, I'm digging through my collection of bits and models looking to build an entire squad around him.  I've been lucky enough to find enough to put just that many models together, and am considering picking up the collectors range Iron Hands Tactical Squad from GW for a ton of great bionic bits and bobs that would do wonders for the look of the army.  Oh, and that special character from IA10 might be in the making if I can come up with the right bits! 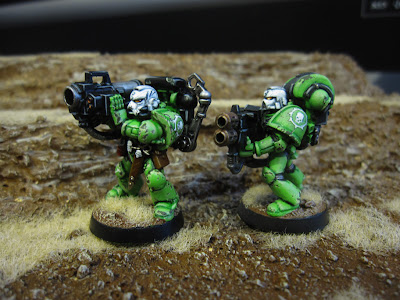 All in all I'm extremely happy with how this guy came out, and while I was at it I went ahead and painted the chapter badge on the tactical multi-melta marine I was using as a rough guide.  I still have to go through and do that for most of the rest of the army, but with how easy it went on with these two I don't suspect it would take more than a day to get done, now if I could just find the time!

I love the Badab War, if you're working on an army from the conflict or have one built, I want to see them!  Share a link in the comments!
Posted by Unknown at 08:00