On The Table: Bjorn the Fell-Handed 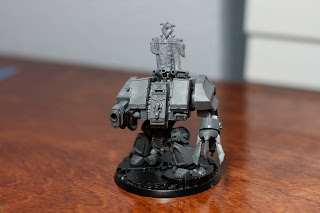 Unfortunately GW doesn't have a Bjorn the Fell-Handed model available anymore and since I put the Old Guy in my WAR Games Con list (Reminder: barely more than a week away!) I figure I'd better get him built and painted.

Bjorn is actually going in my Marines Exemplar army, and obviously I'm using the Space Wolves Codex counts-as.  This is the fine line of counts-as: I want him to have the distinctive iconography since he's a Special Character, but I also want him to blend in with the rest of my Marines Exemplar.  My compromise was to include the wolf banner and wolf tails to give him the shape of Bjorn, but his colors will be red-black-cream and he has a few Marines Exemplar markings.  I went with the plain front armor pieces so I could free-hand some dragon designs, since none of the existing Venerable Dreadnought panels had a "Bjorn-y" feel to them. 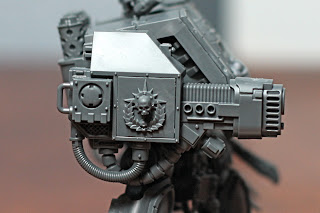 Here's one of the Marines Exemplar touches: throw a skull in the iron halo and you've got the Marines Exemplar logo.  Luckily iron halos and skulls are abundant in the 40k bitz inventory.  His claw (made from Ork Choppas) needs some additional smoothing, but he's just about ready for primer.

What's your policy on "counts-as"?  Do you try to make the models immediately recognizable or require a Rosetta Stone for deciphering what's what?
Posted by Real G at 08:00