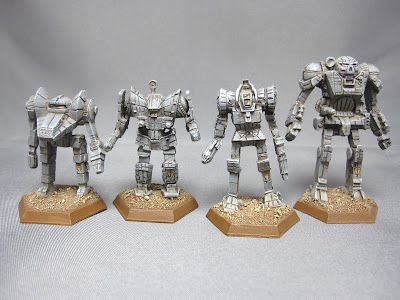 I know some of you might be confused, it's understandable really.  It's been a VERY long time since I've worked on anything from one of my favorite games ever, Battletech.  So long in fact I don't believe I've ever posted anything on TPC about it!

For years I've had the idea to get a campaign of Battletech going with friends.  Eventually I started seeing a group of newer gamers at an old shop starting up the game, just as I was moving across the country!  Luckily, I was moving closer to a good friend who is just as enthusiastic about this old game as I was and we quickly hatched the idea of playing out a campaign of some sort.  The result of that idea ended up being the Civil War fighting between Davion and Steiner forces on the planet Talon.  He would take the Davion loyalists and I would go with the Steiner force.

The 22nd Avalon Hussars were my chosen force and I didn't just want to go back painting grey as I have always done with my Grey Death marines, so I knew I'd have to tackle things a bit differently. 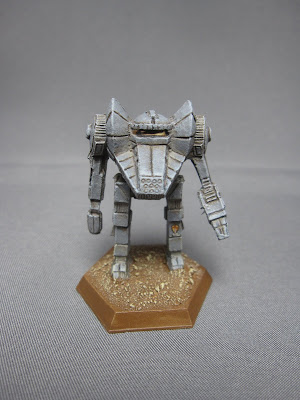 The models are all from the Classic Battletech boxed game.  They're not the sharpest looking models as some of the detail is smudged with other issues like mold injection spots or big mold lines present on most of them.  But when a box comes with 24 plastic models all the rules, maps and other accouterments, it's hard to pass up for $40!  The models won't win any beauty contests, but for tabletop stand ins they are far better than the old school card cut outs!

I decided that I wanted to have the full hex bases for my figures, so after a little chopping and cutting of the modeled base, I attached them to metal hex bases.  The bases are empty so I filled them in using spackle, and once dry I based them using a mix of random sand and gravel similar to this tip. 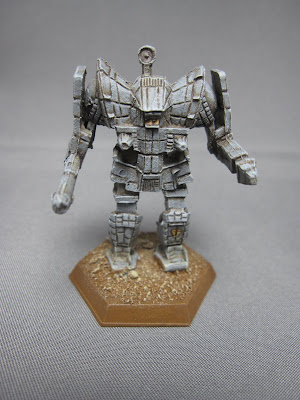 To start the paint, I used Rustoleum Grey Primer as my base color.  Once the spray was dried, I washed them all rather heavily with Devlan Mud.  It took me a few looks to get the wash into all of the crevices and lines of the armor, which ended up bringing the models darker than I had expected.  I sped up the dry time by using a hair dryer from about 12 inches away from the models using a back and forth sweeping motion to keep from heating the models up too much.

The armor plates were then painted in loose fashion with Codex Grey, leaving some of the color underneath still showing on a few of the plates and being sure not to get the paint in the armor creases.

For a highlight I used a very light dusting of Fortress Grey with a very large brush from top down so that the paint hit mostly the upper edges of the armor plates.  Dusting is like drybrushing, but with FAR less paint in the brush!  By using a larger brush I could focus more on the edges instead of worrying about over painting the surfaces of the armor. 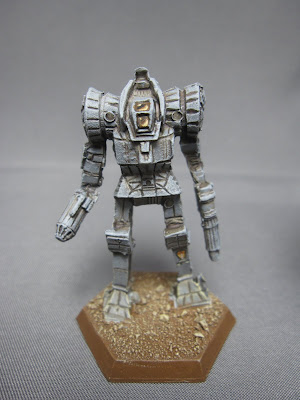 The lenses were painted with Flat Earth, followed by Orange Brown, highlighted Dark Flesh, and given a final dot and line highlight of Beige.  This left the lenses slightly lighter than I wanted so I went back in with Black in the middle sections of the lenses to punch up the contrast.

The bases were painted Flat Earth and drybrushed Beige.  I also drybrushed the feet of the 'Mechs with Beige to help tie them to the terrain more.

The models were finished off with a spray of Matt Varnish through the airbrush. 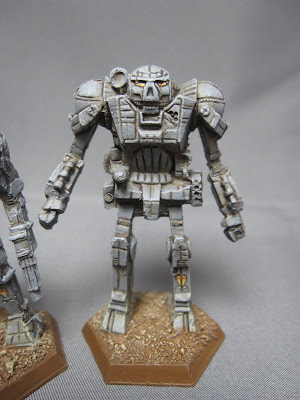 In the end I really like the dirty slightly browned grey I was able to achieve.  The models are definitely only tabletop standard, but given the quality of the models, and the quantity for that matter, I'll take it!  Simple, effective, and easy to reproduce for the rest of the mechs in my force!

Anyone else out there getting any Battletech games going?  When's the last time you fielded a Lance or Star or mechs?  Oh and to say I'm a excited for Mechwarrior 5 is an understatement...
Posted by Unknown at 08:00