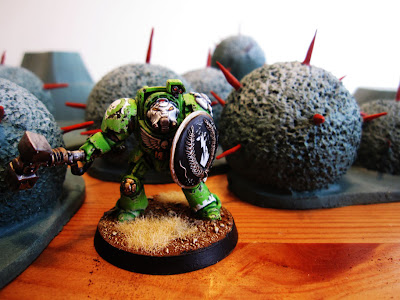 It's been many years since I first opened a Warhammer 40,000 rulebook or codex to find fully modeled and vibrant battlefields.  Some of those images stuck with me since seeing them for the first time.  One of the terrain elements that stands out among the rest was the death-world cactus/plants.

As a way to return to my roots and help add a little flair to what could have otherwise been a bland set of a hastily prepared terrain set, I jumped at the chance to recreate the old school alien cactus. 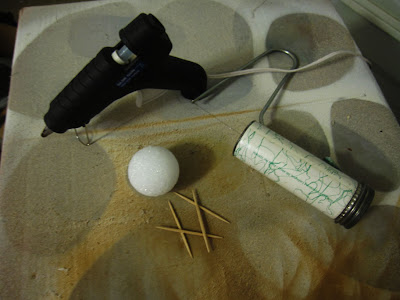 The items needed are pretty basic.  I used some small foam balls, toothpicks, hot glue and a
Hot Wire Cutter.  You could likely get away with regular white PVA Glue and just a hobby knife in place of the hot glue and hot wire cutter. 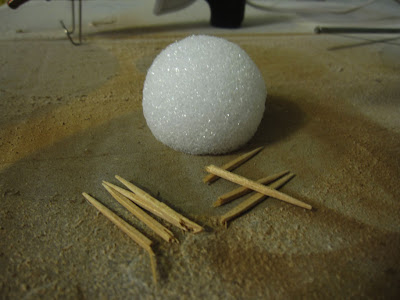 To start off I cut the ball on one side straight across to give it a good base to sit on and give it more of a planted into the ground look.  You can vary the amount you cut to add some different sized cactus.  There were some that I cut nearly in half compared to others where I cut just enough to give it a flat surface to stand on.
The toothpicks I broke in half, first to make it easier to push them into the ball and second to give me more chances of randomness.  If you keep them whole and run the toothpicks clean through the ball, you start to take up a lot of space in the middle of the ball quickly and you'll have to begin placing them carefully to miss plunging them into each other.  Doing it this way, you can just push them into the ball with near impunity. 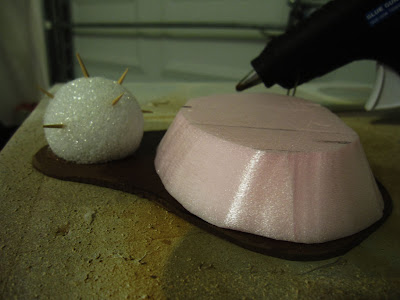 I glued the cactus onto a Hardboard template using hot glue.  I was worried at first how the hot glue would react with the foam, but it seems to work just fine.  I simply put down the glue in a big glob and pushed the cactus down onto it after a second or so of cooling.  Spinning the ball in place seemed to help create a better hold than just sitting it on top of the glue. 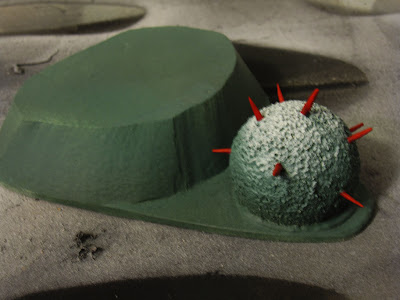 To paint them, I used house paint globbed on rather heavily to get into all of the pours, once dry I used my airbrush to paint them green and then dusted it with a quick highlight of white.  The spines were painted by hand with Mechrite Red and highlighted with Blood Red.

There you have it!  Quick and easy and fun.  It's always fun to go old school once in a while.  The end results definitely helped to spruce up what ended up being a bland looking set of terrain.  If I had more time to spend on them, I would likely get some flock and work on the colors a touch more, but for now, they'll just have to do!
I have more terrain to share, but that will have to wait until next week.  By then I'll hopefully have pictures of armies fighting over the ruins of lost colonies and broken civilizations!  Have a good weekend all!
Posted by Unknown at 18:24