On The Table: New Sons of Medusa 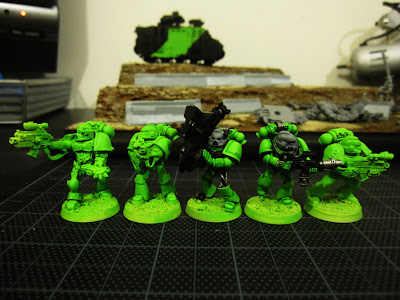 After my Sons of Medusa Terminators were finished, I knew I couldn't just stop there.  Things immediately started picking up in my head and I began making trades and purchases that would create the variation and new look that my force needed.  Those moves led me to collecting this group of bits that as of Friday I began building the troops you see above!

Much of what I'm after is wargear variation as I've shown with my last tactical troop.  The next step is to create another full tactical squad/devastator squad out of those new models to help bulk my force up even further and create more opportunities to try different strategies on the battlefield. 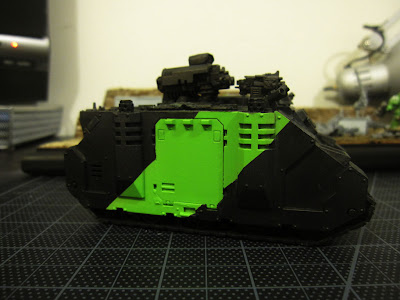 One thing I will definitely need down the stretch is more transport ability.  To start me off I've re-purposed a Razorback that was originally meant for my Grey Death Marines.  I owe this new Command Razorback design to Imperial Armour 10 and the absolutely fantastic work the Forge World team did creating the background and imagery for the Sons of Medusa.  This stripe was done using blue masking tape carefully placed and airbrushed on.  The other side has a similar stripe.  The black is a throwback to the Sons Iron Hands days prior to the Schism.  The black will be brought up a little more grey and the green will be toned appropriately. 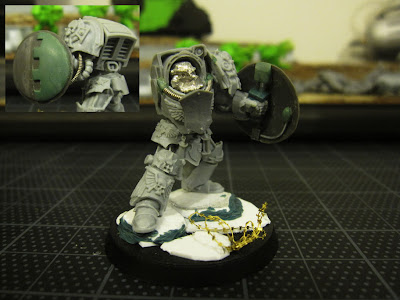 The big project right now though is this beastly character.  My 'Not'-Lysander conversion based on Commander Culln from Forge World.  The model is still waiting for more bits to arrive but so far he's come together quite nicely.  I'm looking forward to having him finished and ready for paint.  I'm sure he's got a lot more work to go until then though!

Well there you have it!  That's what I've been up to this weekend!  I'd love to heard your C&C on the lot of the group so far!  I've been splitting my time between them all just working on whatever catches me from one second to the next!
Posted by Unknown at 08:00