On The Table: Fire Hawks Testers 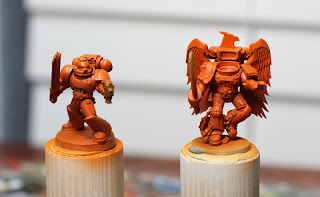 Since Grey is showing off his Badab green meanies, I figure I should counter that with some bright orange Badab models.  The two above are my first Fire Hawks testers: the left, a standard Assault Marine and on the right my contribution to the Badab Character Competition, Librarian Aachen Tournet. (Nothing like waiting until the last minute!)

Tournet is sort of an un-Librarian (no psychic hood, but a unique piece of psychic wargear), so I and doing him up in sort of an inverted version of the normal Librarian paint scheme.  Instead of all blue with a chapter shoulder pad, he'll be mostly orange with blue shoulder pads.  Here's the progress on him so far: 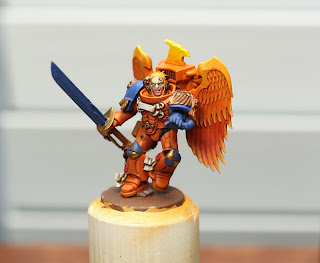 I think the Sanguinary Guard wings are perfect for Fire Hawks special characters, although I need to work a little on the hawk head bit for the top of the jump pack.  This one was a hasty test piece (the contest ends on the 15th) for my version of Courbray from Imperial Armor 9.

Speaking of the Badab War, the Fly Lords of Terra are close to releasing the revision of the Badab War supplement.  Revised to work as an add-on to the Imperial Armor books, it will feature a host of new characters and special Battle Formations.
Posted by Real G at 10:00