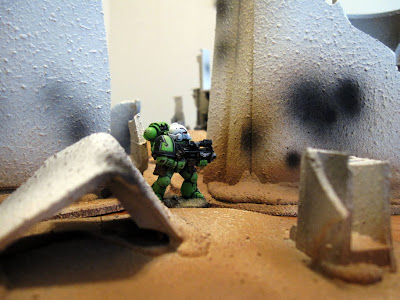 This coming weekend I have a gaming day with a small group of friends at one of their houses.  The only problem is, there isn't much in the way of a gaming set up!  So, to help kick the day off right and make for a much more interesting gaming environment, I've taken it upon myself to create a set of really fast and easy terrain!  The idea is simple, build a set of basic terrain mostly from what I've got laying about! 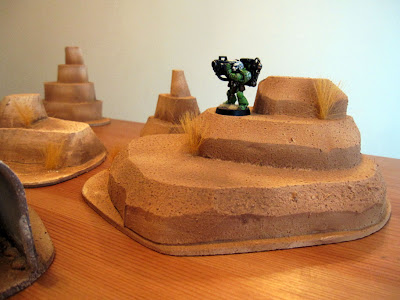 Hills are almost a necessity for any starter terrain kit.  So, I broke out some of my left over expanded insulation foam that's been floating around for years and cut it up and glued it down to a cheap
hardboard panel I picked up at a local DIY shop.  The hills were then painted with white house paint and then given a quick spray of Krylon Textured Spray Paint

.  To finish them off I primed them with white spray and airbrushed them brown.  The tufts of grass were stuck on using hot glue, a trick I might have to share in a quick tip! 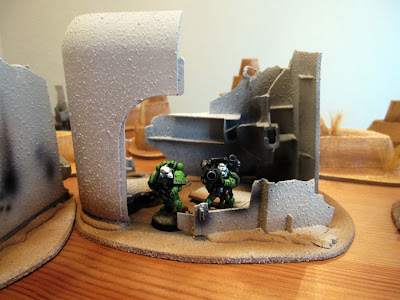 At the outset of this project I wasn't quite sure what I would use or even make for the 'other' set of terrain for the desert.  I knew hills would go in, but until I went to cleaning out my garage a few weeks back, I was a little lost for materials.  The inspiration came as I was going to throw out an old broken printer I've had sitting in my garage for a good year now.  I broke out my hammer and smashed it into bits and pieces, releasing a little stress along the way I took almost all of the housing parts from the printer and put them to the side knowing they were perfect for a ruined alien settlement! 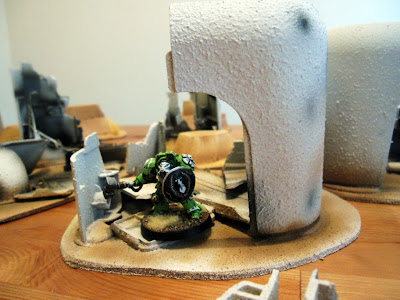 I used the hot glue gun to attach the parts to the hardboard panel templates and arranged them in a haphazard fashion, just going for the rough shape of a building and adding other bits to the insides to give it that ruined appearance.  I used a very heavy coat of the Krylon Textured Spray Paint

and primed the buildings white.  I then airbrushed the brown in and used black through the airbrush to create burnt out spots and blast marks. 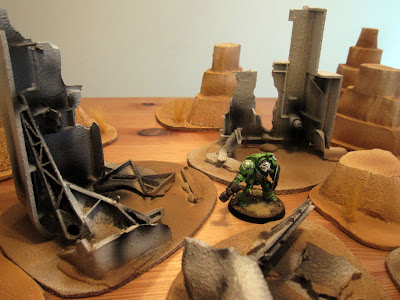 The end results came out far cooler than I had expected and they will make for an awesome backdrop to our games this weekend.  The airbrush really made them a quick and good looking set of terrain.  The soft details making it a great backdrop and not the main focus.  With plenty of variety and plenty of terrain to fill the table with, I expect some fierce ruin to ruin exchanges. 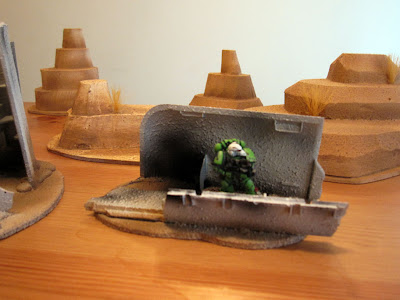 The use of the printer housing was a great way to make use of something that was going to just go in the trash anyway.  I highly suggest you take a second look at anything you're about to throw out and consider its uses in your hobby!  Just a word of caution though, if you're going to bust something apart with a hammer, be sure to use safety glasses and gloves!  Those sharp jagged plastic edges will do some damage if they're hurled at your eyes or snag your flesh. 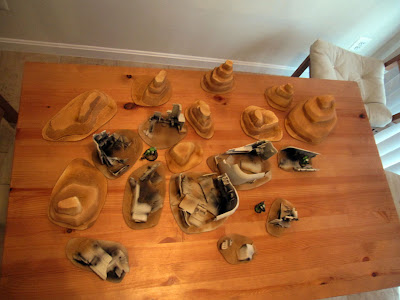 I still have one more set of quick terrain to work on, but I'm going to be hard pressed to beat out what I've already made with this group.  The next set is going to be a greener type and I'm going with an old school feel for it.  Think Warhammer 40,000 Second Edition terrain and colors!

This weekend can't come fast enough!  It's spring break this week and I've got some serious down time to take advantage of until Saturday morning.  Stay tuned for all of the craziness!
Posted by Unknown at 08:00