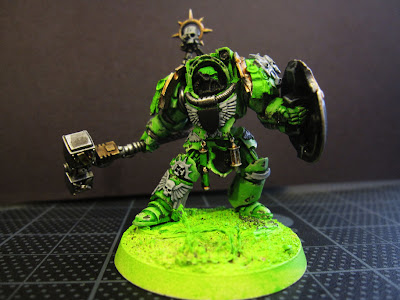 He's not much to look at right now, but I thought I would share him as a way to keep myself interested in getting him finished!  A LOT to finish on this guy still but I think once the white is finished, and I get the basing brown I'll feel much better about him.  There's always a point when I'm painting an elaborate model like this that I start to get fed up with the slow progress or things begin to look like they aren't coming together.  Usually it's around the 40-50% finished mark and I take an extended break, only to come back a week or two later and finish the model up in a matter of hours! 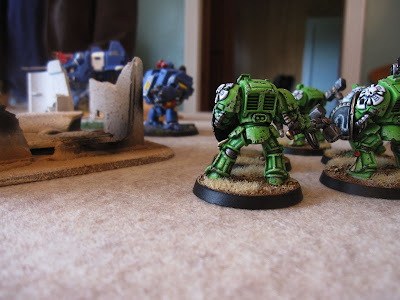 On Saturday, I was finally able to get some games in after a few months drought.  The Sons of Medusa took the field for four games of varying point levels and I took the chance to play around with different builds and try my new units out as well, to include Proetus who stomped his way through a Tau battle line with two terminator squads!  So far I'm very happy with how my terminators have performed and I absolutely love the way they look out on the table. 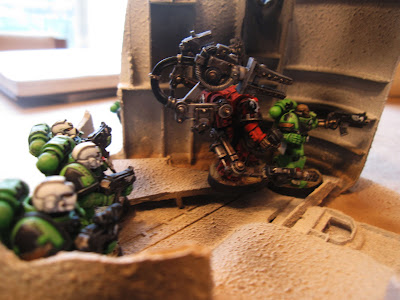 The terrain I put together for the day worked wonders.  The desert terrain set ended up fitting in perfectly with the felt table my friend had put together and made for a really dynamic looking battlefield with plenty of cover but open enough for good firing lines.  As you can see above, my Master of the Forge made good use of that cover and bolstered a lot of it to help out my Tactical Squads who were taking advantage of it every game. 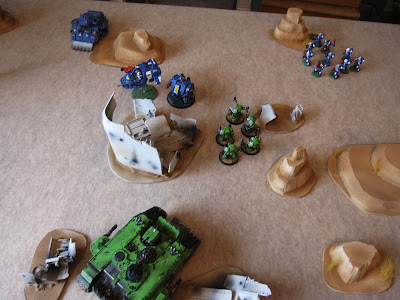 In the end, it was a great day with a lot of gaming, conversation and food!  I really hope I get the chance to play more often this summer as it really helps to get me excited about building new models and units for my force, like Proetus!

I'm hoping to get back to work on my Sons of Medusa sometime this week.  I have a lot of new stuff in for them, but before I get too deep into anything new, Proetus needs to catch some more paint!
Posted by Unknown at 09:16