On The Table: Assault Terminators WIP 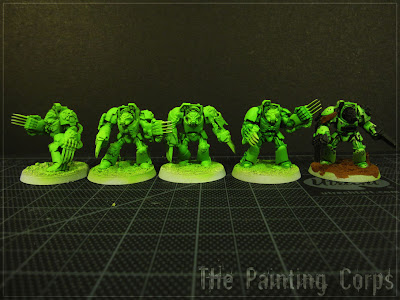 Things with my latest batch of terminators have taken a bit of a slow start.  The modeling went extremely quick and well paced, but once they were primed and ready to catch paint, things began to slow down to a near halt.  All of this was of course around the same time I picked up a new Xbox game.  I'm not proud of it, but I've been spending far too much time digging in with Halo: Reach this last week!  It's been some time since I really got into a video game, so it's only natural I'd take a little more time to really give one a full run.

The terminators did however catch some work over the last few days.  Not a lot, and not even a lot of time spent, but the slow plod of progress makes finding traction easier.  The airbrushing happened earlier last week, along with a few extra marines I had in white primer.  I always make sure to have something 'extra' when I go to airbrush, just in case I mix too much paint.  It's always nice to get a few more models started, even if they won't find paint table time for a while, they'll go that much faster when they do. 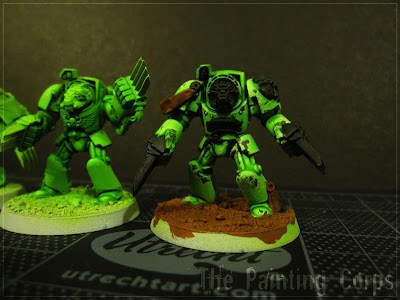 Yesterday, I was out at the Olney, MD Games-Workshop to kill some time and talk shop, and brought along my stuff to see if I could get anything done.  Thankfully, I was able to actually get work going on one of the terminators.  I decided to move ahead with a single model to help me map out the lightning claws for the rest of the squad.  The majority of the armor is done, and next up will be metallic areas, then details.  I hope to get this one finished soon and then quickly get to work on the rest of the squad.

So stay with me through my divided attention!  I'm wrestling with a few ideas to get things back on track here on TPC and hope to get back to putting up more tips and ideas.
Posted by Unknown at 10:10