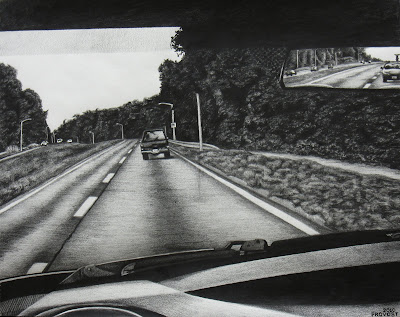 Last Fall, I was lucky enough to find myself in a transfer portfolio course that would help to build and develop my work in a way that would help me gain acceptance by a four year school.  Our first project were the Rhode Island School of Design drawings, a required set of drawings that any applicant to that school must create and actually send in with their applications!  I personally had no plans on even applying to the school, but knew this would give me a great place to showcase some of my talents at a level I'd yet pushed myself to achieve.

The drawing above was the first of the three, the bicycle drawing.  I played with a lot of concept ideas in my sketchbook before finally arriving at the first person driving view.  The bike was the last thing I wanted to be found and I tried to keep it as off the viewers mind as possible as they made their way through the drawing.  This drawing also set the bar for the style and method I was going to use for the other two images as well.  They didn't all have to be the same, but I felt that moving ahead with a theme and style would make them a stronger set overall.  With that, I moved forward with more images based around the car. 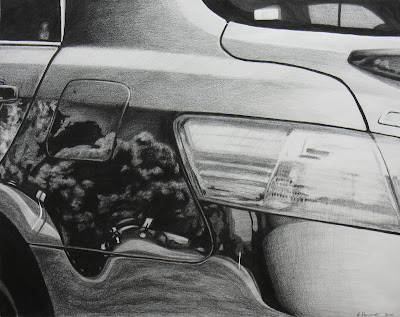 For the text drawing, again I felt it was more about moving as far away from the requirement as possible while still achieving the goals.  My favorite part about this image is that when viewed in person, it takes some time for many people to actually make out what their looking at.  The reflections just distort and pull the viewers eyes in odd directions and keep them from making things out right away.  The taillight however was my favorite section to build up.  There were a lot of different layers of pencil work in it that overlapped and created a very real sense of translucency and depth. 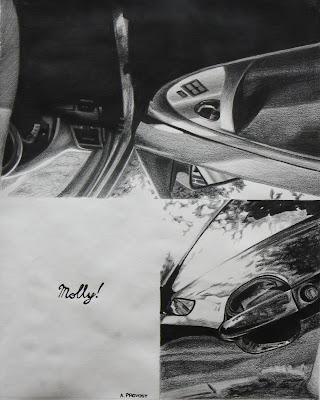 The two-sided drawing was the last of the three we had to do for class, and with that, I did my best to tie the images together more, giving both a view of the outside of the vehicle and more of the interior to add some story.  The first panel is in the lower right, with the top folded down in half and the text being the back of the small 'book'.  The door is 'opened' by the viewer to show the door opened image.  The door opened image is then opened upward to the back of the drawing. 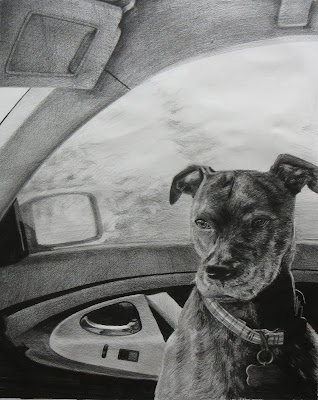 The interior of the 'book' opens up to my dog Molly!  She was very impatient during our little photo shoot but eventually she sat still long enough for this stoic look.  The reward was a quick car ride to go grab some breakfast that morning!  With this the double-sided was completed and the images fit together quite nicely.

I used these as part of what eventually became my transfer portfolio.  The portfolio that ultimately found me accepted to MICA to finish out my degree plan!  They were the beginning of something high end from my hands in two dimensions.  These were the most refined drawings I had ever done to this point, and became a point of pride for some time, that is until the scale of my work jumped up exponentially!

Thank you for taking the time to look at my humble work, and for supporting everything I'm doing both within the hobby and out in my artwork!  To have so many people read our ramblings every week means so much to me.  Thanks to you all.
Posted by Unknown at 12:49