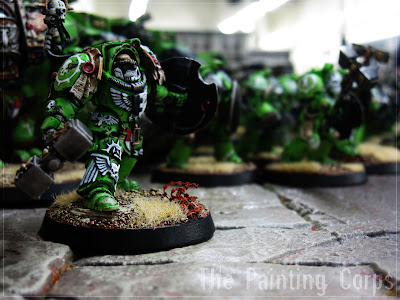 With a trip up to the Games-Workshop Bunker in Bowie, MD the other day, I took a few minutes off to my own on an empty table toward the back to get a few shots of my Sons of Medusa as they stand today.  The army has come a long way since my first steps into creating a hardly known army from the depths of the Rogue Trader days.  Now, it's become a sort of legacy project that will see me into many more years of modeling and painting. 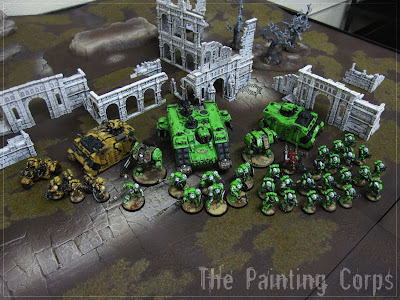 The army so far consists of a Lysander, Master of the Forge, Sternguard, Assault Terminators, two Dreadnoughts, two tactical squads and razorbacks, an Attack Bike and a Land Raider.  I have more than that still to come with at least one more squad of Tactical marines, razorback, land raider, and as you've seen prior, more assault terminators.  Further in the future, there are more Desert Support units in mind, namely more bikes and a Land Speeder, both of which I have on the shelf in various stages.  I also have another Techmarine with servitors that could find his way into the army should I find myself in need of something different! 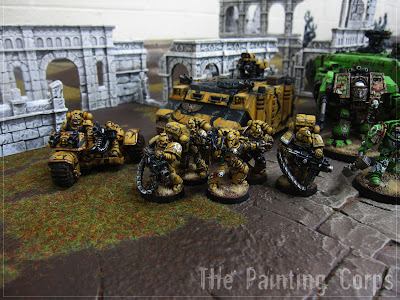 The Desert Support group is always a source of pride for me.  I love the scheme and the idea behind it.  The throwback look, and new styling always make people smile a little more, especially those who have been around the hobby a long time.  I want to expand in the future as I mentioned above, and hope to have enough for them to take an entire force comprising entirely of the camo marines and camo marines only. 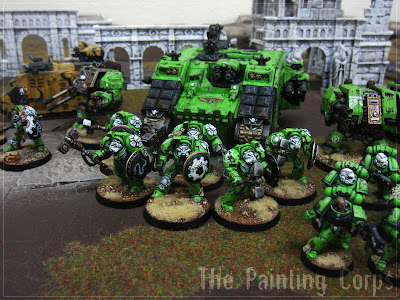 The terminators are quickly becoming the new core of my army after taking them in a few battles so far.  They perform great and look even better and meaner.  I can't wait to have the rest of them finished and awaiting the call for reinforcements from the core units stuck in the fight!  The second land raider should come soon after the last terminator is finished and it will be time for yet another photo shoot! 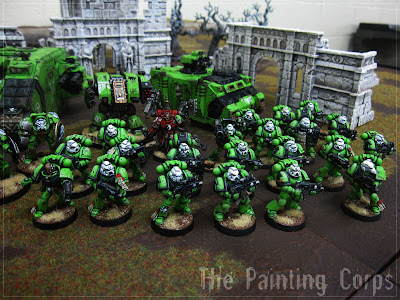 While they're not 100% just yet, the basic marines are a huge part of what makes my army successful many games.  I love how they play, and how they look.  I plan to mix a bunch of new bionic marines into these squads.  I might even go back in on the marines above to add some cog details and other freehand additions.  That will likely be at the same time I add the rest of the chapter badges!

If you're looking for a few more shots of the army so far, along with one of some work in progress stuff thrown in, head over to my Sons of Medusa Gallery on DakkaDakka.com.

With new units will come new photos, but army shots aren't something I get a lot of time and space to put together!  I hope you all have enjoyed the journey so far, as there is so much more to come!
Posted by Unknown at 08:00